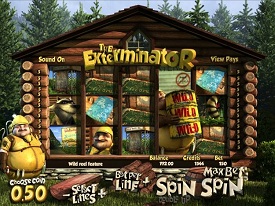 If you tried to come up with 100 different themes for an online slot machine, chances are that you still wouldn’t think of “pest control” among them. But despite the fact that it’s a pretty unlikely choice for a slot, Betsoft’s The Exterminator is still a very fun and engaging slot machine game. With great graphics and some cool special features, it’s a refreshing change of pace from the ordinary slot machines found at most online casinos.

The Exterminator is the latest game in the 3D slots line at Betsoft casinos. It features the same level of cartoonish animations found throughout this series of games, this time in support of a forest theme. The entire game takes place in and around a cabin situated deep in the woods, where Alvin (the exterminator) is attempting to capture an elusive raccoon that has been seen in the area. The look and feel of the entire game is very “woodsy,” featuring plenty of green and the use of natural sounds and colors is consistent throughout the game.

Of course, the goal here is to match symbols on your active paylines. There are eight symbols to match (including the exterminator and the raccoon, of course), and all wins must occur from left to right. You’ll need at least three of the same symbol to score a win, and the more matches you make, the more you’ll win.

One of the coolest things about The Exterminator is the Sticky Win feature. This bonus isn’t one that you need to hit a specific group of symbols to trigger; instead, it’s built right into the game, becoming activated every time you make a winning combination. When you’ve scored a win, rather than awarding a prize right away, all of the non-winning symbols will respin. This process will happen over and over again until you do not make any new wins on the reels, or you’ve locked the entire board into place. Once the respins have stopped, you’ll win all of the prizes you’ve earned. This process can result in some huge wins; it’s easy to start with just one small win but see the respins build up into multiple five-of-a-kind combinations.

There are also a couple of cool bonuses to look out for. There’s a wild truck symbol that will lock into place, then expand to cover the entire reel it is on at the end of a spin. You’ll also want to look for the footprints symbols: if you manage to find five of those symbols anywhere on the reels, you’ll activate the Great Raccoon Chase game. This game offers you a number of free spins, each of which comes with a random multiplier of between 1x and 5x.

Finally, there’s also a second screen bonus round that’s reached whenever you manage to hit five or more blueprint symbols anywhere on the reels. This will take you to a scene outside the cabin where the exterminator is attempting to capture the raccoon. Your job will be to pick a potential hiding place for Alvin to investigate. Once you’ve done this, a short animated scene will play out, after which you’ll be awarded with a large number of credits.

With an unusual theme and plenty of interesting bonuses, The Exterminator is a joy to play.