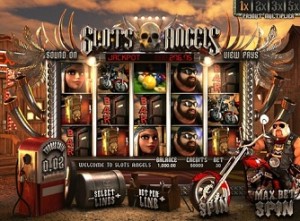 Slots Angels, a biker-themed online slot machine, has recently been released at many Betsoft-powered casinos. The game features the same great graphics and music you find in the other most popular 3D slots from Betsoft, along with enough twists and turns in gameplay to keep players on their toes for every spin.

In Slots Angels, players are taken into the world of biker gangs and dive bars in an attempt to win prizes. The 30-line, five-reel slot machine starts off with a clever rock song and never stops delivering on the theme. The game features plenty of biker animations, themed games, and symbols, all of which are designed to pull you into the motorcycle atmosphere.

No matter how fun the theme is, of course, most players will be interested in the gameplay and prizes available in Slots Angels. With a bevy of special features, this game has both plenty of variety in gameplay and no shortage of ways to win big prizes on every spin.

For instance, players can immediately win hundreds of credits simply by hitting three dartboard symbols on a single spin. That’s triggers a “pick one” game in which the player much choose one of the dartboards in order to reveal a prize. There’s also the always popular free spins game, in which players are treated not only to some free wins, but also a wild third reel that promises even bigger rewards.

The most ambitious of the special features is the bike race game. In this bonus round, players are asked to pick one of three racers who they expect to win, and then watch as the bikers compete in a race. The better the chosen biker does, the larger the prizes that are awarded to the player.

One of the areas in which Betsoft has recently been innovating has been in bonus rounds that take place directly on the reels. One of the easiest ways to do this is by adding a bonus round after every regular win during the game, and that’s the route they took in Slots Angels. Each time a player scores a win, the machine gives players a free respin of the third reel, offering players another chance to win. Additional wins come at multipliers which start at 2x and can rise to as much as 5x if the player keeps winning, as this feature will not end until the player finishes a respin without making a winning combination.

Finally, there’s nothing like chasing a big win, and Slots Angels gives players that chance by providing a progressive jackpot. While the jackpot is only available if players wager the maximum number of coins (at any denomination of the players choosing – there are different jackpots for each coin level), the prize is usually significant, with jackpots of several thousand credits or more being common.

With a fantastic theme and a wide range of special games and features, it seems likely that Slots Angels will become one of the more popular slots in the Betsoft 3D lineup. Make sure you check out our Slots Angels slot review and remember Slots Angels is already available at many online casinos featuring Betsoft games – and should be added to more Betsoft casinos in the near future.