One of the most exciting holiday adventures many of us dream of one day taking is an African safari. Traveling through savannahs and seeing some of the world’s most majestic creatures would be a real thrill – albeit one that most of us can’t afford. However, you can experience just a little bit of the same thrills by playing Safari Sam, a new online slot machine developed by Betsoft. 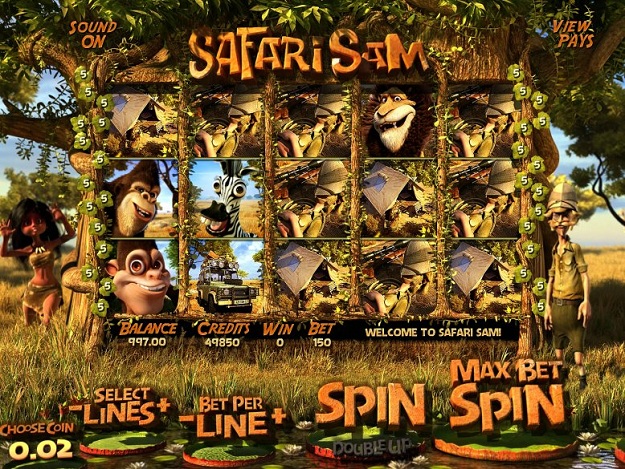 Safari Sam is a five-reel, 30-line slot machine that allows players to bet up to five coins per line. With six different coin denominations available to choose from – along with the choice to bet anywhere from a single coin to 150 – it’s easy to spend exactly how much you’d like to on each spin, even for high rollers. The object of the game is to match three or more of the same symbol consecutively from left to right on your active paylines.

The symbols in Safari Sam are pretty much what you’d expect given the theme. There are nine symbols in all, which can roughly be divided into three groups. First, there are three symbols depicting different equipment you might need on a safari – tents, a jeep, and so on – that can earn you up to 25 coins if you match five in a row. Next are the animals, ranging from monkeys and apes to zebras and lions, which offer larger prizes. Finally, you can win big by matching the girl or Safari Sam himself, who offers the biggest prize. Five of Sam will earn you 500 credits for every coin you wagered – up to 2,500 if you bet the full five coins per line.

There are a couple of special features worth looking out for as well. For instance, there are some random wilds that can show up from time to time. These will not only complete winning paylines, but can also provide multipliers of as much as 10x the normal winning values. There’s also a scatter symbol – a tree – that can earn you up to 300 coins if you find five anywhere on the reels.

If you manage to combine a gorilla, zebra and monkey on the first payline (the one going straight across the middle of the machine), you’ll trigger a free spins game that comes with a few extra benefits. Before you start taking your free spins, you’ll have the choice to select one of the three animals to serve as a wild symbol for the length of the feature. That animal will also serve as a 2x multiplier, doubling any wins it takes part in. You can also trigger a bonus round by hitting three or more binoculars symbols. In this game, you’ll click on locations to watch animals, receiving bonus prizes until you find the “collect” symbol.

Finally, if an entire reel should contain the same symbol, you’ll win the prize for hitting three of those symbols on a payline. In addition, the symbols will combine to take up only a single position, with new symbols – and new chances to win – falling into the other two positions on the reel. However, this feature is only active if you play all 30 paylines.