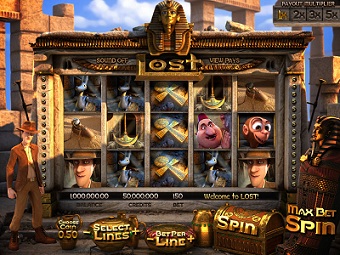 Betsoft Gaming is renowned for creating the best 3D slot games, and today they released yet another amazing slot game in their Slots3 range for you to enjoy.

The new slot game is called ‘Lost’ and it is an Egyptian-themed 3D slot revolving around the main character ‘Dr. Dakota Bones’ and his sidekick who is called ‘Farooq’. The story of the game is Dr. Dakota Bones and Farooq searching for the worlds ‘Lost’ treasures, and sees them travel into the desert searching for pharaoh Ah-Amdad’s treasure chamber where lots of treasure is awaiting them.

Lost is a 5-reel, 30-line slot machine featuring a maximum bet amount of $75 per spin. The game includes four bonus rounds and we have more information on each one below:

Multiplier Re-Spin Bonus – The multiplier re-spin bonus is an excellent feature in Lost and gives you the chance to win big with a 5x multiplier. There are four different levels (x1, x2, x3, and x5) and once the multiplier bonus is hit the center reel automatically re-spins and you win whatever the amount is multiplied by your your level, and only ends when you win (or lose) on the 5x multiplier.

Monkey Click Me – The Monkey Click Me feature was first featured in the ‘Three Wishes‘ slot game from Betsoft and proved to be very popular with players, hence why it is back. It is an instant-win bonus round and you can activate it by landing the monkey symbol anywhere on reel four. Once you land it the monkey will appear and cover the fourth reel, and gives you eight different ‘click me’ options with generous prizes on offer and only ends when you click on a collect symbol.

The Mummy’s Tomb – If you manage to collect three relic symbols you will activate the ‘Mummy’s Tomb’ bonus round. This sees Dr. Dakota Bones and Farooq enter pharaoh Ah-Amdad’s treasure chamber where they can collect the treasure they have been searching for. Once in the chamber you will have the choice of three different tunnels, each offering a different value, with big prizes on offer!

Center Wild Reel – Everyone loves a center wild reel feature and in Lost if you land a ‘staff’ symbol in any position the center reel becomes wild, giving you a 2x multiplier on your wins.

We just spoke to Mike, who is a huge fan of Betsoft’s 3D slot games, and he had this to say about Lost:

I was pleasantly surprised to hear that Betsoft Gaming had released a new 3D slot because I’ve heard nothing about it, and usually lots of people are talking about new releases in anticipation. Of course, i couldn’t wait to load the game and try it for myself, and when i did i was instantly hooked on it. Just like the other Betsoft games the graphics and sounds are breathtaking. While the payouts aren’t as large as in some of the other games, i managed to win 4,680 from a 150 coins bet which was awesome. This is a game i will definately be enjoying until another release is made.

So where can you play Lost you ask? Visit www.BetOnline.com where you can easily deposit via credit card or other options like Bitcoin and new players get a 100% up to $5,000 slots bonus. UPDATE: We now have a a complete Lost 3D slot review up.