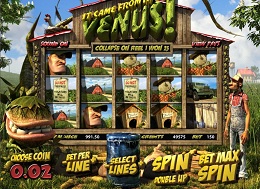 If you’ve been looking for an online slot machine that’s truly out of this world, Betsoft may have just released the game you’ve been waiting for. It Came From Venus is the latest in Betsoft’s line of 3D slot machines, and features the same great graphics and animations you’ve come to expect from this series of games. These visual features are combined with exciting bonus rounds and a very engaging theme to make for one of the most entertaining online slots released this year.

First, let’s take a look at the basics of this game. It Came From Venus features a total of 30 paylines, with players having the option of playing anywhere from a single line to all 30. There’s also an option to bet anywhere between one and five coins per line; combine this with the fact that several different coin values can be chosen, and there’s plenty of customization available when it comes to how much you spend on each spin.

Once you begin spinning the reels, you’ll get a good look at the game’s theme. As you’d expect, It Came From Venus features a created from outer space – in this case, a plant that has landed right in a farmer’s field. The farmer and the plant end up becoming quite fond of each other, but that doesn’t stop the military from trying to capture the plant in order to study it.

The symbols used throughout the game support this theme. You’ll be matching farm equipment, military vehicles, and the characters that are featured in the game’s story. The biggest prizes are earned by matching the plant from Venus; if you can hit five of them in a row on the same payline, you’ll be awarded with 500 credits per coin.

It Came from Venus also features an intriguing mix of classic and innovative bonus rounds. For instance, like most slots at Betsoft Gaming casinos, this one has an animation-heavy second screen bonus round. In this case, you’ll play the part of the farmer, trying to rescue the plant by guessing which box the military has stowed it away in. Choose a box, and then find out if you’ve made the right choice! Either way, you’ll be sure to be rewarded with a prize of bonus credits.

There’s also a classic free spins game that can be activated by collecting three food sack symbols. During your free spins, you’ll now be able to have those food sacks lock in place as “sticky wilds,” giving you an even better chance of winning big prizes. If you play all 30 lines, you can also take advantage of the Stacked Collapsing Wins feature. There are stacked symbols all around the reels, and if any reel should happen to cover any reel, you’ll win an additional prize for those three symbols (the same prize you’d normally get for a left-to-right three of a kind. After your prizes are awarded, those stacked symbols will then leave the reels to be replaced by new symbols, after which another round of prizes are awarded if you have any winning combinations!