Vikings have one of the coolest reputations of any group of ancient warriors. When people think about Vikings, they not only think of conquests and battles, but also pillaging, partying, and soldiers who were fearless as they entered the battlefield. This lifestyle is at the center of Viking Age, a 3D slot machine that’s all about living the Viking way. With bonus games that emulate the world the Vikings lived in, and consistent payouts that always leave you feeling like you’re rewarded for playing, Viking Age is the kind of slot designed to be played for both fun and profit. 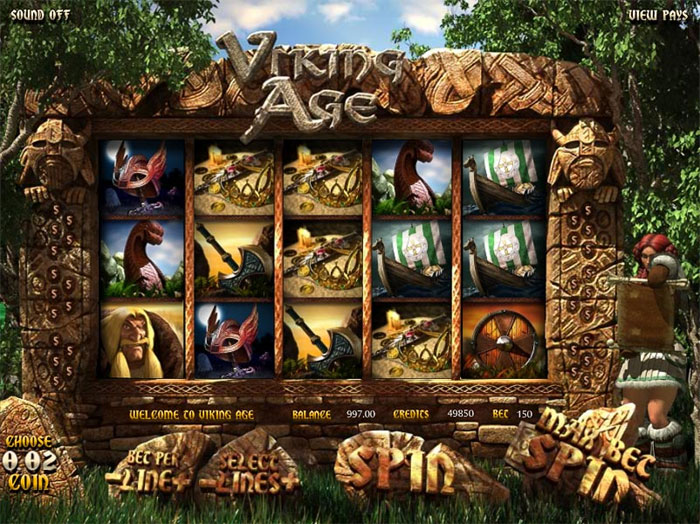 Viking Age is a 3D Betsoft slot machine that follows most of the standard rules you’ll find on other Betsoft games. The game is a five-reel slot with 30 paylines, in which players have the option of wagering up to five coins per line. The object of the game, as always, is to line up symbols across your active paylines in order to win prizes.

There are eight different symbols you can attempt to match in order to win money on the reels. These range from Viking weaponry and shots to the Vikings themselves, who are worth the most money for you. Lower value symbols generally take three in a row to score wins, while the more valuable prizes can win you at least a small prize just for hitting two.

Viking Age also has a handful of special symbols that can trigger bonus rounds during play. For instance, hitting three or more of the Amma symbols (the Viking woman) will trigger a free spins bonus round. In this game, multiplier symbols will appear to the left and right of the reels – one symbol for each line. When you win during your free spins, should that free spin occur on a line with matching multiplier symbols both at the start and end of that line, your winning will multiply by that amount (anywhere from 2x to 5x).

There’s another very cool game that’s triggered if you are lucky enough to spin up three or more of the arm wrestling symbols. This starts a second screen Arm Wrestling bonus round, in which the two Viking warriors who star in this game face off in an arm wrestling battle. You’ll have your choice of either warrior to bet on, and if your chosen Viking wins, you’ll win a huge prize!

Theme and Presentation in Viking Age

Viking Age takes place in a world of fierce battles and strong warriors – a world that’s both epic in scale and filled with mysterious symbols and runes. The game itself takes place in a rather generic wilderness scene, though there is some Viking imagery on the reels themselves – imagery that actually comes into play when you get into some of the game’s bonus features. The animations and voice acting are somewhat limited, but you will have Amma constantly serving as your companion during the game, yawning and complaining if you’re taking too long to play, and also participating in the action during the bonus rounds. Like the rest of the game, the slot’s music has a fairly epic feel, and sounds like the type of song you’d hear in a movie as the Viking armies march off to war.

There is no progressive jackpot available in Viking Age, and in fact, most of the prizes available on the reels are fairly modest, as this game is about gaining more consistent wins rather than huge payouts. However, there are a few different symbols that can earn you some pretty significant prizes.

For instance, hitting the blond Viking warrior offers the biggest prizes of all. Should you manage to hit five of him across a payline, you’ll earn 300 credits per coin wagered. While the bearded Viking isn’t quite as valuable, you’ll have happy when you see a lot of him on the reels too — five across the same payline will earn you 250 credits.

There are several different special features in Viking Age, but our favorite one to play was the Runestone Doors game. This game is triggered whenever you hit three or more Viking helmets. When this occurs, you’ll zoom in on the side of the reels, where you’ll see a collection of mysterious runes light up. You’ll have to help the Viking woman Amma select one of the runes. At that point, one of the reels will open up to reveal a mystery prize. This could be a reward of instant credits, a number of free spins, or instant access to one of the game’s other bonus rounds, such as the arm wrestling game. The variety of possibilities here always makes the Runestone game exciting – especially since you can never lose, no matter what the outcome is.