Tycoons is a slot machine that’s all about gambling it up with the rich and famous. During the game, you’ll be battling against some of the world’s wealthiest men and women for bragging rights at the poker table, trying to snag an elusive progressive jackpot, and generally living the lifestyle that comes with having essentially unlimited money. Of course, playing Tycoons won’t make you that rich, but hitting the right combinations might just make you enough money to feel like you belong at the table with the tycoons. 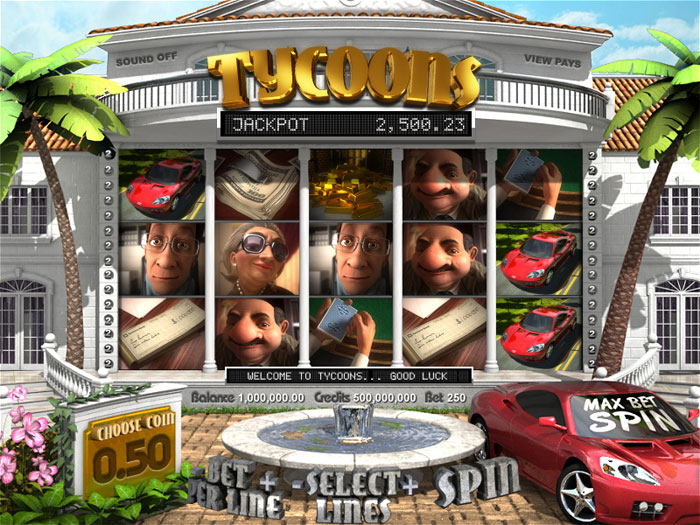 Tycoons is a 30-line, five-reel slot machine available at Betsoft casino sites. It’s a part of their 3D slots line, meaning that you can expect high-end graphics and animations while you play. Players have the option of playing for one to five coins per line, with a number of different denominations available depending on how much you’d like to spend.

The object of the game is to match symbols consecutively across your active paylines; the more symbols you match, the more money you can win. There are ten different standard symbols, with the tycoons themselves representing the biggest wins, and some of the trapping of luxury – gold, cash, cars and so on – winning smaller prizes.

In addition, there are a number of special symbols, icons and combinations that can win you bonus cash or activate special features. For instance, if you land the gold, cash, and check symbols together on one of the three main paylines, you’ll activate a “click me” round where you can choose one of the symbols to earn instant credits.

In the lower-right corner of some of the tycoon symbols, you’ll find a small “fs” mark. If you make a winning combination of three or more tycoons that includes at least one of these marks, you’ll trigger the free spins game. Not only will you get a number of free spins, but one of the center reels will become wild for the duration of the bonus round. As an added bonus, any wins that include the character that originally triggered the bonus round will be doubled.

There are two other special symbols that deserve more attention below, but that we should at least mention here. The briefcase symbol is hugely important, as hitting five of them on the same payline while betting the maximum will earn you the Tycoons progressive jackpot. Also, receiving three or more of the card symbols will activate the second screen bonus.

Theme and Presentation in Tycoons

Tycoons is all about luxury, and everything in this slot machine was created to further this image. The game’s four characters are all stereotypes of various types of ultra-wealthy folks: a Middle Eastern oil magnate, a computer genius, an heiress and a portly banker. Each has their own set of animations and voiced lines that help flesh out their personalities. The graphics as a whole are designed to further this theme, as the game takes place in a luxurious mansion with a fountain out front, which you can hear bubbling during gameplay.

There are two kinds of huge payouts you can hit while you’re playing Tycoons. First, there are a couple of big wins available on the reels, including a 500 credit prize that comes when you match five of the computer genius on a single payline. Matching five of the other three tycoons can win you between 150-300 credits per coins wagered.

Tycoons also has a progressive jackpot that can win you a small fortune should you manage to hit it. In order to be eligible, you’ll want to make the maximum bet at your denomination (playing all 30 lines for five coins each), and then match five briefcase symbols on a single payline. The jackpot is almost always the largest prize available in Tycoons, and varies depending on the coinage you’re playing for.

The most exciting special feature in Tycoons has to be the Poker Game Second Screen Bonus Round. This game is triggered by hitting three or more card symbols anywhere on the reels. Once that happens, you’ll be taken inside the mansion, where the four tycoons are playing in an exclusive high-stakes poker game.

You’ll be prompted to select one of the four players to stake your fortunes with. The hand will then begin playing out, with each player making bets or folding their cards. Each time your chosen player gets deeper into the hand, you’ll earn more bonus credits to add to your balance. If your player should win the hand, you’ll not only gain some bragging rights, but you’ll also win additional bonus credits! This game can be quite lucrative, with wins of thousands of credits not uncommon should you be lucky enough to pick the winning player.