Slot machines always seem just a little bit magical, but True Illusions takes it to a whole new level by basing the entire game around magicians, tricks and putting on a show. In this game, you’ll earn money by helping a magician do classic stage magic tricks, from slight of hand illusions that produce rabbits from a hat to making his beautiful assistant disappear. All along the way, you’ll be earning prizes for being such a good sport, especially in the game’s generous bonus rounds. If you like magic – or just appreciate any game that builds strongly around a solid theme – you’ll want to try playing True Illusions. 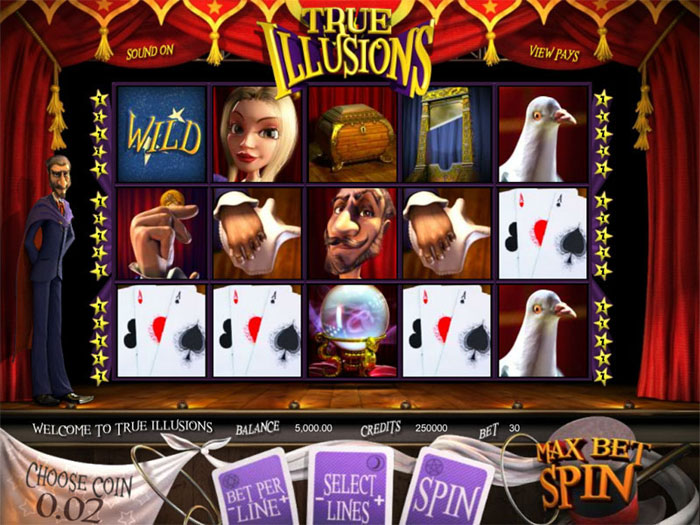 True Illusions is one of the most popular 3D online slots available. It is a five-reel, 30-line game that’s part of the Slots3 series from Betsoft Gaming. Players have the opportunity to play up to five coins per line, at a variety of different denominations. The object of the game is to match identical symbols from left to right across your active paylines. If you match three or more symbols, you’ll win prizes; the more you match, the bigger the rewards. In the case of True Illusions, the symbols you’ll be trying to match are all related to magicians and stage acts, and include things like magic hats, doves, coins and the magician’s assistant.

In addition, True Illusions features a wild symbol that can substitute for any of the normal symbols. While these symbols are generally scattered around the reels, there is a stacked random feature that sits on the center reel. It is possible to land the stacked wilds so that all three center reel positions are wild. Not only does this greatly increase your odds of winning on that spin, but the center reel will remain wild for a number of additional spins, potentially earning you significantly more on additional spins.

Another symbol to watch out for is the card symbol. If you hit three of these symbols on the screen in any position, you’ll trigger a bonus game in which the magician will have a trick up his sleeve for you! In this game, the magician will prompt you to pick a card – any card – out of the deck. You’ll then see the magician pull off one of his signature tricks, and at the end of it, you’ll earn yourself some free instant credits.

There’s also a symbol that represents the magician himself. This symbol triggers a free spins game that we’ll talk about a little later. 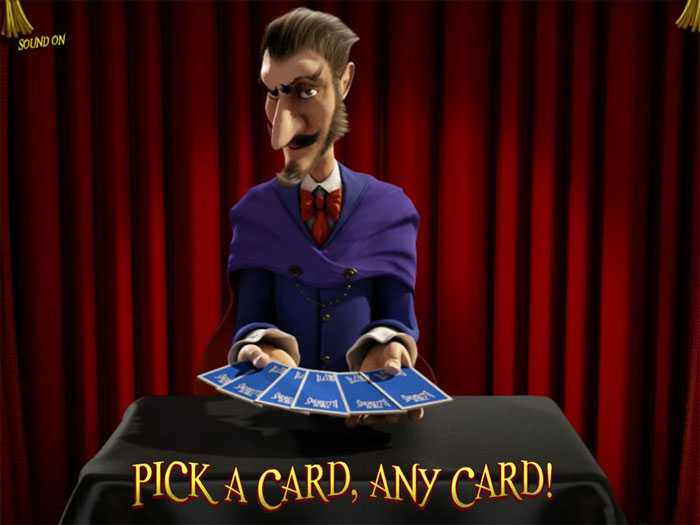 Theme and Presentation in True Illusions

From the moment you begin loading the True Illusions slot, you’ll know that you’re in for a game that takes place in the world of magicians and stage magic. The game itself is set up as though it were some sort of magic trick, taking place right on what looks to be an auditorium stage. Of course, if the game itself isn’t magical enough for you, the magician is always on stage, performing a few slight of hand tricks while you spin the reels. The slots bonus games all take the form of magic tricks as well, and many of the animations that follow wins on the reels also feature the magician performing illusions.

While the music and sounds don’t add that much to the experience, they aren’t a distraction either. Overall, if you’re a fan of magic, you’ll probably get a kick out of all the little “tricks” that are depicted throughout the game – they definitely do a good job of adding to the gameplay experience.

While True Illusions doesn’t have a progressive jackpot to speak of, there are still a few impression wins that can be had on the reels. The big money symbol in this game is the magician’s assistant, who can earn you up to 500 credits for each coin you wagered if you hit five of her on the same active payline. Another big paying five-of-a-kind is the chest symbol, which can reward you with up to 300 credits.

Of the many fun and exciting bonus games found in True Illusions, our favorite is the free spins mode. While many games offer you the chance to take some free spins, True Illusions takes it a step further by adding a cascading feature into your free games.

In order to trigger the free spins game, you’ll first need to hit three or more magician symbols. They don’t have to appear on the same payline, though: anywhere on the reels will do. You’ll then immediately be taken into the bonus round, which plays exactly like the standard slots with one major exception. When you hit a winning combination, those symbols will then disappear from the reels, and new symbols will fall onto the reels to replace them. As long as you keep making winning combinations, you’ll keep scoring more wins!