Treasure Room is a game that’s all about what slots are at their heart: winning big prizes. You won’t find fancy graphics or any amazing animated sequences here; instead, the focus is on scoring huge amounts of money by matching the right combinations of symbols. Not only are there some huge prizes available on the reels and in the game’s special features, but there’s also a progressive jackpot that can earn you even larger rewards. If you’re more interested in substance than style, Treasure Room is definitely a slot machine that’s worth playing. 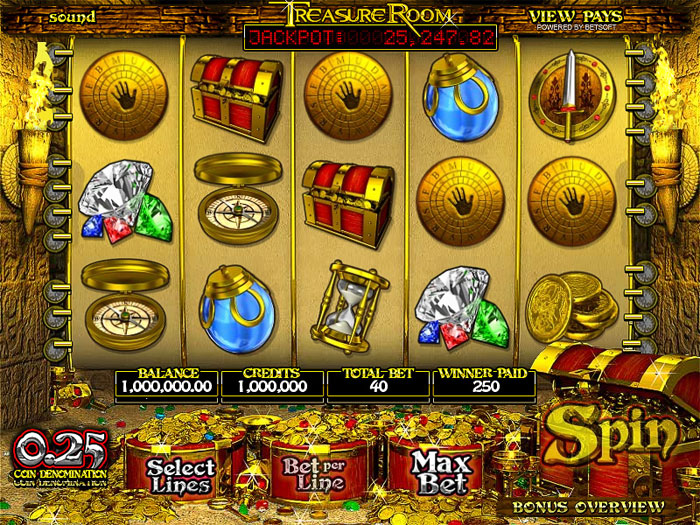 Treasure Room is one of the most basic 3D slots online developed by Betsoft Gaming and it features five reels and up to 20 paylines for players to bet on. Players have the option to wager anywhere from one to five coins on each active payline, and several different coin denominations are offered to allow players some flexibility in how much money they’d like to wager.

The object of Treasure Room is to match identical symbols on your active paylines in order to win prizes. One of the cool things about this game is that winning combinations can be made in either direction across the reels; whether a combination starts from the left side or the right side of the game screen, it will still count as a winning combination.

There are eight different standard symbols that will award you with instant credits. These range from the low value symbols like maps and hourglasses to the bigger prizes, including precious jewels and gold coins. The biggest prize of all comes from the treasure chest symbol, which is also key in winning this game’s progressive jackpot.

There are also a couple of special symbols that can be used in order to activate bonus features. For instance, receiving three or more sword and shield icons on the same active payline will trigger an instant win “pick me” game that’s fairly straightforward. You’ll be prompted to select one of the sword and shield icons, each of which has a hidden prize behind it. You’ll instantly have the number of coins behind that icon added to your winnings.

Another important symbol is the calendar symbol. Hitting three or more of these symbols on an active payline will begin a second screen bonus that we’ll talk about later on in the favorite features second of this review.

Theme and Presentation in Treasure Room

As one of the earliest Betsoft 3D slots, Treasure Room does not have many of the advanced graphical features that some of the newer games in this line boast. There are no animated sequences or impressive voiceovers; there isn’t even any ongoing background music, though not all players will miss that anyway. Instead, you just have simple graphics that depict what the game is all about: a room in some ancient building that’s loaded with valuable treasures for you to plunder.

Despite the lack of flashy graphics, the theme is still easy to understand and a bit of fun. The limited animations are still nice, and what background noise there is – the flickering flames of a couple of torches on the room walls – fits in perfectly with the feeling of being in a secret chamber. If you’re looking for the most impressive looking game on the market, Treasure Room isn’t it – but it’s definitely attractive enough to play without feeling like the lack of style is distracting. If your seeking a more impressive 3D slot game you should check out the Mamma Mia slot machine instead.

While Treasure Room may not be particularly visually impressive, there are a ton of huge payouts available in the game, which means plenty of chances to quickly amass a fortune while playing. The biggest payout during standard play comes from hitting five treasure chests. This results in a mammoth prize of 5,000 credits per coin wagered. Other big payouts come for five diamonds (2,000 credits) and five coins (1,000 credits), all of which are bigger than the largest prizes on most other Betsoft slot machines.

If that weren’t enough to whet your appetite, there’s also a huge progressive jackpot available if you can hit all five treasure chests while betting the maximum number of coins. There’s a separate progressive jackpot available for each coin denomination in the game, with higher denominations often having jackpots in the tens of thousands of dollars!

Our favorite feature in Treasure Room is the Rare Treasure Second Screen game. This game is triggered any time you hit three calendar icons anywhere on any active payline. In this game, you’ll have a choice between three different doors, each of which will have one of three types of precious stones. Each time you open a door, you’ll reveal one of the stones as well as an instant bonus prize. You’ll be given a chance to continue opening doors and revealing prizes until you’ve revealed all three stones, thus ending the game.