Before slot machines, lotteries, or other gambling games, there was another way in which people dreamed of suddenly becoming fabulously wealthy overnight. One such method was to find a lamp that just happened to have a genie inside of it that might be willing to grant you three wishes. Instant wealth, guaranteed!

Three Wishes may not contain any actual genies, but it definitely has the potential to make you a lot of money in a short time. With fun bonus rounds and the ability to play up to ten coins per payline, Three Wishes is a game designed for those who want to dream big. 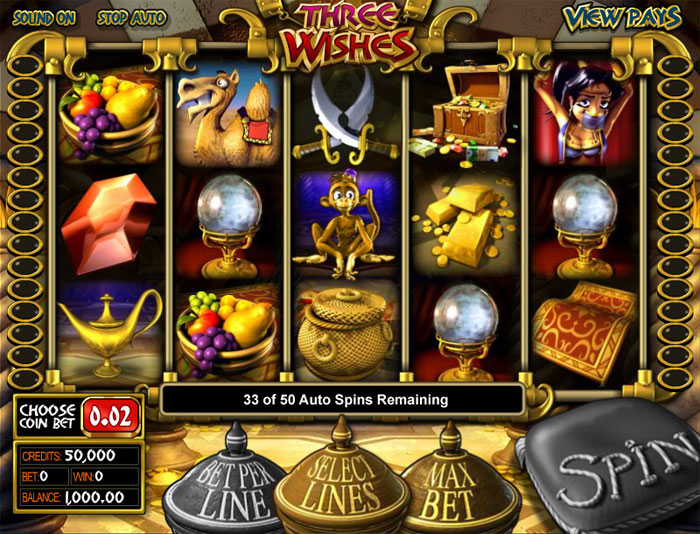 Three Wishes is a Betsoft 3D slots game that features five reels and 30 paylines of action. Players have the option of betting anywhere between one and ten coins on each line, with a variety of different coin denominations available depending on how much you want to spend while playing.

The object of the game is to match identical symbols consecutively across the reels on any of your active paylines. These combinations can begin with the first reel moving left-to-right, or from the fifth reel moving right-to-left. In order to win, you’ll need to match at least three of the same symbol.

There are eight standard symbols that offer instant payouts. These Arabian-themed symbols include swords, camels and princesses, among others. There’s also a magic carpet symbol that serves as a wild or substitute symbol. Not only does this symbol substitute for any of the standard symbols, but it can also win prizes on its own – both my matching three or more on the same payline, or by landing a single magic carpet on the first reel, which adds a small bonus prize to any other winnings you may have on that spin.

There are also a number of special symbols that activate bonus features during the game. For instance, landing a monkey symbol on the center position of the center reel will activate the Click Me Crazy feature. This take on the popular click me bonus game will have you choose between the symbols surrounding the monkey. Choose one, and the monkey will shake off the icon in order to reveal an instant bonus prize behind it. You’ll have the opportunity to continue receiving prizes until you reveal a Collect symbol, which will end the game.

Three or more treasure chest symbols anywhere on the screen will begin the Three Wishes Free Spins feature. The more chests you see, the more spins you’ll receive, up to a maximum of 20 free spins if you should hit five treasure chests. You can even earn extra free spins during the bonus round.

Finally, what game about wishes would be complete without a lamp symbol? Three or more lamps on a single active payline will trigger the Three Wishes bonus round, which we’ll talk about more a little later.

Theme and Presentation in Three Wishes

Three Wishes is a game based on Arabian legends of genies who grant wishes, and the atmosphere of the game definitely reflects this. The decor and background graphics of the game certainly has an Arabian Nights feel to it, as does the short musical riff that plays in the background during the game. While the animations in Three Wishes aren’t as extensive as those in some of the newer Betsoft games, they certainly get the job done; you’ll see small 3D animations each time you win a prize, and there’s even a bonus round that has you interacting with a genie that’s very flavorful and fun.

The biggest wins on Three Wishes may not seem quite as large as those offered on most Betsoft slots, but this is somewhat mitigated by the ability of players to bet up to ten coins on each line instead of the normal five. The most valuable “normal” symbol is the princess, who is worth up to 200 credits per coin wagered.

However, there’s even a bigger prize available through the magic carpet, which also acts as the wild symbol. If you should hit five carpets on the same active payline, you’ll win 250 credits for each coin you wagered. With no progressive jackpot, this is the largest prize available during normal play, though the prizes in the game’s bonus rounds can sometimes be even bigger.

Our favorite feature in Three Wishes is definitely the Three Wishes Second Screen Bonus Round. This game begins after you’ve connected with three or more lamp symbols on the same active payline. When this occurs, you’ll unleash a genie from the lamp, who will then give you a chance to choose between a variety of different wishes: wealth, fame, travel, wisdom, everlasting love and long life. Choose the wishes you desire most, and you’ll be given bonus credits for each one. Once the game ends, your bonus credits will be totaled and added to your account!