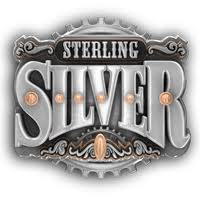 Most 3D slot machines aren’t exactly what you’d imagine when you first hear the term 3D. For instance, the Betsoft 3D slot machine games feature immersive graphics that use visual effects to create some depth of field during animated portions of their games, but they’re nothing like the kinds of effects you’d get from a 3D movie. However, at least one slot machine on the market today does have those kinds of effects.

One of the most exciting slots released in recent years was Microgaming’s Sterling Silver 3D slot machine, and it remains one of the most played 3D slots to this day – because it is the only true-3D slot game available online. To play it to full effect you will need a pair of 3D glasses, these are simply glasses which have one red lens and one blue lens. Unfortunately though, USA casino players will not be able to play it, due to it being a Microgaming game. 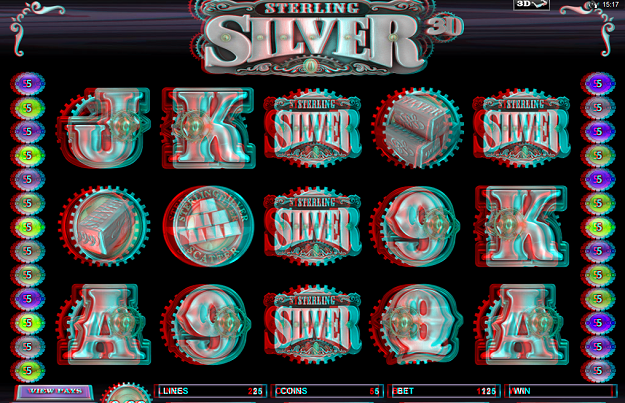 When Microgaming first launched this slot many of the casinos which carry the game in their gaming suites sent players a pair of these 3D glasses for free, but if you have missed out on getting a free set you can purchase them very cheaply online or in your local shops. However if you haven’t got a pair or cannot access a pair then you can always turn off the 3D setting via the 3D option at the top of the slot machine and set the game to play in 2D mode. 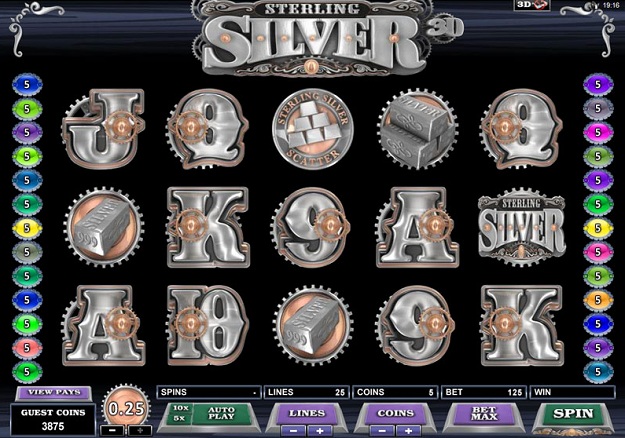 In most ways, Sterling Silver 3D is a pretty typical online slot machine. It features five reel action with up to 25 paylines, each of which players can choose to play for up to five coins. In the game, players must try to match symbols moving from left to right across their active paylines.

Most of the symbols in the Sterling Silver 3D game are very generic slots symbols. It mostly uses the “poker ranking” symbols in order to award prizes, along with a couple of “silver bar” symbols that award bigger wins.

There are also a couple of special symbols that offer some additional bonuses on the reels. First, there’s the silver coin scatter symbol. Three of these symbols anywhere on the center three reels will win you 10x your total bet for that spin. In addition, you’ll earn 15 free spins, during which all of your winnings will be doubled.

You can also win a lot of extra money thanks to the Sterling Silver Wild Symbol. Of course, this symbol will substitute for any other symbol (except for the scatter), allowing you to form additional winning combinations. In addition, every time a wild symbol is used as a part of a winning combination, the symbol will randomly display a multiplier of anywhere between 2x and 10x, greatly increasing the value of that win.

So let’s take a look at the Sterling Silver 3D structure and what has made it such a popular game. The game boasts 25 paylines spread over its five video reels and these are option paylines – so you can play as many or as few of them as you so wish. You can also play from one to five coins per line per spin, and the coin value setting may be adjusted. The coin values available are: 0.01, 0.02, 0.05, 0.10, 0.20 and 0.25, and these coin settings are currency dependent (so if you opened you account in £, £0.25 is the largest coin value, or if you opened it in €, €0.25 is the largest coin value available).

This slot has a Silver theme running throughout it and this is reflected in all of the reel symbols. These include the usual Playing Card symbols – those being the 9, 10, J, Q, K and A symbols which have been superimposed with Silver. You will also find a Single Bar of Silver and a Stack of Silver Bars. The Sterling Silver Logo symbol is your Wild symbol and it is a Stacked Wild symbol on reel number three. The Wild symbol is also a random multiplier symbol and can boost the value of all winning combinations it helps to complete from two to ten times their normal values.

The Sterling Silver 3D slot machine uses the same visual effects that were used for most of the last century to make 3D movies, comics and other 3D visual effects work. The 3D image is created by actually layering two different images on the screen: one in red, and another in blue. In order to view this image in 3D, you’ll need to use a classic pair of 3D glasses, which also has red and blue lenses. This creates an effect in which each lens filters out the image of that color, meaning that each of your eyes sees a different, slightly offset image. This tricks your brain into seeing a 3D imagine that appears to pop off the screen.

What this effectively means is that in order to play the Sterling Silver 3D slot machine in 3D mode, you’ll need to get your hands on a pair of red/blue 3D glasses – unless you enjoy getting a headache while playing the game! However, if you do not have a pair of glasses handy and still want to enjoy the game on its own merits, you can simply click the 3D button during gameplay to revert the game to 2D mode, which will make the game much easier to view.

One reel symbol we haven’t mentioned, but one which plays an important part of this slot, is the Scatter symbo. This is a pile of Silver Bars with the word Scatter underneath. Whenever you spin in three of these symbols anywhere in view on reels two, three and four you are awarded the free spins bonus game. This is where you will be rewarded first with a scatter pay payout worth ten times your base game stake amount and then 15 free spins. These will all play out with a x2 multiplier attached to each and every winning spin during this bonus round.

Another bonus game can be awarded, however this is an optional one which you can choose to take and play whenever you have spun in a winning combination. It is the gamble feature and this is where you will have a chance of increasing any winning spins value in a card guessing game.

You will need to decide whether the next card drawn out will be either red or black, guess correctly and you will instantly double the amount of money you gambled, however an incorrect guess will result in your losing what you won on the initial winning spin!

You could however go for a higher payout and this is done by correctly guessing whether the suit of the next card to be revealed will be a Diamond, a Heart, a Club or a Spade, guessing the correct suit means your initial wagered amount will be instantly quadrupled. You can continue the gamble feature until you lose or until you reach the gamble limit.

The biggest payout on the reels in Sterling Silver 3D comes from the silver bar symbols. In particular, the three silver bar symbol is one you’ll want to hit, as it awards up to 1,000 credits per coin wagered if you hit five across a payline. Only slightly less exciting is the single silver bar; this can award up to 500 credits. Of course, all of these payouts can be multiplied by as much as 10x by wild symbols, meaning it is possible to win up to 10,000 credits on a single payline!

Where Can You Play Sterling Silver 3D?

The Sterling Silver 3D slot machine is playable at Microgaming casinos, and has been available at most casinos running Microgaming’s software since June 2011.