Have you ever dreamed of traveling the open roads on a motorcycle, or taking part in a biker gang that would be feared in all your nearby towns? For most of us, this isn’t a realistic option, or at least not one we’d want to get involved in. But with the new online slots game Slots Angels, you can get a little bit of the same feeling from the comfort of your own home.

Slots Angels features lots of action, a great theme, and some great music, making it the prefect choice for any biker. But even if you’re not into motorcycles, you might find the bonus rounds and progressive jackpot enticing enough to make Slots Angels worth playing. 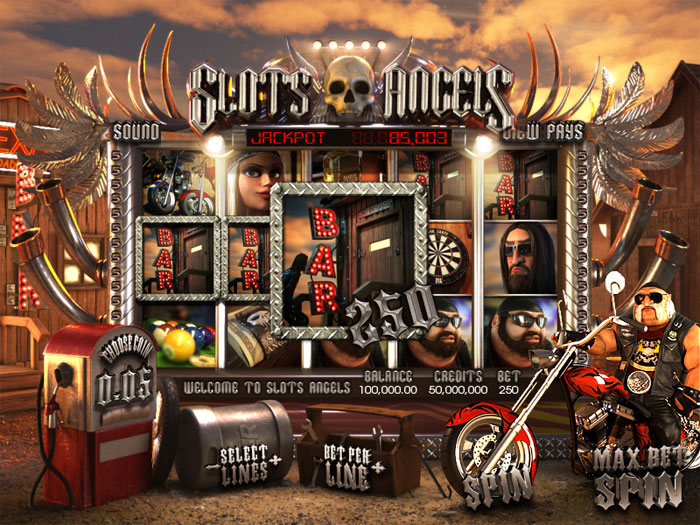 Slots Angels is a 3D slot machine that’s part of the Betsoft lineup. The game is a five-reel slot that features up to thirty paylines for players to wager on. Several different coin denominations are available, and players can wager up to five coins per line — or up to 150 coins in total, if you’re playing all 30 lines.

The object of the game is to match a variety of biker-themed symbols on your paylines in order to win prizes. In order to claim a prize, you’ll need to match at least three of the same symbol running from left to right. Symbols range from money clips and bars to three members of the biker games, which offer players the largest prizes.

Unlike many slot machines, Slots Angels does not feature a wild symbol, nor is there a traditional scatter symbol that can win players prizes. However, there are several different special features that work to add variety to the gameplay in their own ways.

First is the Party Free Spins Mode, which is triggered whenever three or more “bottles” symbols anywhere on the reels. In this game, players receive a number of free spins, during which the center reel is turned completely wild in order to offer even bigger prizes to players.

Next up if the Darts Click Me game. This basic “choose one” game is activated any time you hit three or more dartboard symbols anywhere on the reels. When this occurs, you’ll be prompted to hit one of the dartboards in order to instantly reveal a prize, which is usually worth several hundred credits. There is also a Biker Race Bonus Round, which we’ll talk about in more detail a bit later.

The special feature you’ll run into most frequently, though, is the Reel Respin feature. This special bonus will be triggered every time you manage to make a winning combination of symbols. When that happens, after you are awarded your prizes, you’ll watch the center reel respin. This will give you another shot at winning prizes depending on where the center reel lands.

There’s also an additional bonus related to this feature. Each time you score a win, you’ll watch the Payout Multiplier Bar move up one slot. After your first win, it becomes 2x; win again on the respin, and it will move up to 3x, and eventually up to the maximum level of 5x. The respins won’t stop until you happen not to win a prize. If you can make it up to the highest levels of the multiplier bar, these wins can be extremely valuable, making this a quick way to win some big prizes.

From top to bottom, Slots Angels does an amazing job of using the biker theme to full effect. There are special features that revolve around bike races and bar games, an animated biker sits on the main game screen throughout play, and the whole aesthetic is designed like a Harley Davidson advertisement. In short, if you’re a biker or just like the whole biker culture, you’ll probably enjoy the look and feel of Slots Angels.

There’s also a theme song to the game that is a great introduction to this machine. It’s obviously a sound-alike (or even a parody) of the classic biker rock hit “Bad to the Bone.” Of course, since you’re here to gamble, the tune has been changed to “Playin’ Some Slots.” It’s a fun little touch that shows just how much thought went into making this game’s theme work.

There are two big payouts worth mentioning on Slots Angels. First, there’s the biggest normal prize on the wheels, which belongs to the big biker. This isn’t exactly a huge prize, as it only awards 300 credits for each coin you bet on the line if you should manage to hit a full five of him. While that’s certainly a reasonably good prize, it’s not as large as the kinds of rewards found on other Betsoft slots.

But it’s actually possible to win a whole lot more with this combination. If you should make that match on the first payline (the center line of symbols) while betting the maximum number of coins, you’ll instantly win the Slot Angels progressive jackpot. The amount of the jackpot varies depending on the denomination of coin you choose to use and how long it has been since the jackpot was last hit, but it is usually worth several thousand credits or more.

The special feature that you’ll get the most enjoyment out of is probably the Biker Race Bonus Round. This game starts whenever you hit three or more of the “Lead Biker” symbol on the reels in a single spin.

When this happens, you’ll be transported into a race that features three members of the biker gang. It’s up to you to pick the one of the three racers you think will win the race. After you’ve made your selection, you’ll get to watch the race take place. At various points in the race, you’ll receive credits based on how well they’re doing. Finally, at the end of the race, you’ll get a bonus based on your racer’s final position. Depending on how well your rider does, this feature can be very lucrative – and watching the race is exciting on its own, as well.