The Slotfather is likely the most famous and most popular slot machine currently in the Betsoft lineup. Featuring a very cool Godfather-like theme that manages to be both mysterious and humorous at the same time, this game does a great job of getting you absorbed into the Mafia atmosphere even as you’re trying to match symbols and win prizes. With some amazing bonus rounds and some extensive voice acting that’s surprisingly good for a slot machine, the Slotfather is at the top of the list when it comes to exciting, innovative slot machines on the market today.

Play The Slotfather For Free 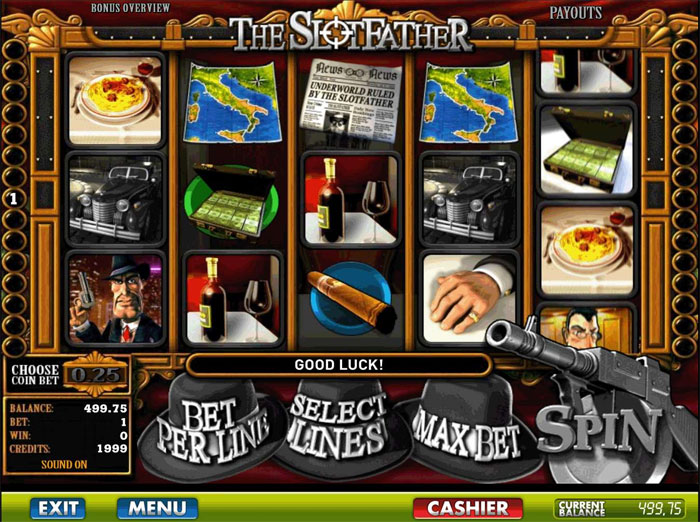 >>> Play The Slotfather for real money at Bovada Casino now <<<

General Info on the Slotfather

The Slotfather is a 3D slot machine from Betsoft that features five-reel action and up to thirty paylines for players to wager on. Players can bet up to five coins on each line, with denominations for those coins ranging between $0.02 and $0.50, which is generally the standard for the Betsoft line of games.

The Slotfather features 11 different symbols that players can try to match from left to right across active paylines in order to win prizes. These include not only some of the Slotfather’s henchmen, but also a variety of different thematic symbols, like suitcases full of money, cigars, wine, and guns.

In addition there are a few special symbols that are worth mentioning, as they can have some pretty interesting effects on gameplay. For instance, the Underboss symbol works as both a scatter symbol that gives you prizes if you land three or more of him anywhere on an active payline, as well as a limited wild symbol, combining with a few of the other basic symbols to also award prizes.

Another symbol to look out for is the Slotfather himself. Match three or more Slotfather icons on any active payline and you’ll trigger a second screen bonus round. This very lucrative game will be discussed in more detail below.

The Slotfather also has some special combinations of symbols that trigger instant bonuses, a popular feature in many Betsoft games. For instance, if “Sammy Quickfingers” appears next to the suitcase of money on one of the three main paylines, you’ll watch him reach into the suitcase and throw you some cash — which you’ll receive as a number of instant bonus credits. Similarly, should “Frankie da Fixer” land next to the Tommy Gun symbol, he’ll fire bullets at the screen. Choose one of the bullet holes, and you’ll immediately earn a number of free spins and (in some cases) up to a 3x multiplier on your wins during those free spins.

Theme and Presentation in the Slotfather

The biggest reason why The Slotfather stands out from the competition is the game’s amazing presentation. From the second you begin loading the game, this slot machine bombards you with its thematic elements, really pulling you into the underworld the Slotfather himself lives in. The game begins with a voiceover from the Slotfather, where the actor portraying him does a Marlon Brando impression (not a particularly good one, but an impression none the less) as he tells you that his slots offer a jackpot you can’t refuse.

The characters look like they’re straight out of a gangster movie, and the music fits too, as it’s reminiscent of the themes from movies like the Godfather trilogy. While it’s not quite like the Sopranos, each character really does have a personality of his own, which makes the game a lot of fun to play, and also makes it clear that the creators of the game have put a lot of work into it, and had fun doing it.

Top Payouts on the Slotfather

There aren’t a lot of big payouts during normal gameplay on The Slotfather, nor is there a progressive jackpot; instead, most of your big wins will come when you get particularly lucky in one of the game’s bonus features. However, as far as the standard symbols go, “Frankie da Fixer” is the one to shoot for. Hit five of him on a single payline, and you’ll earn 200 credits per coin wagered on that line. However, there are several other symbols that offer nearly as much; “Sammy Quickfingers,” the briefcase of cash and the car symbols can each win you 150 credits or more if you hit a full five across a payline. This means that while none of these symbols will earn you an enormous win, there are a lot of ways to pull in a fairly big score.

Favorite Features in the Slotfather

Our favorite mini-game in The Slotfather has to be the second screen bonus round triggered when you match three or more Slotfather symbols. In this game, you’ll be prompted to choose three businesses in the city where the Slotfather’s slot machine will be installed. After you’re done doing so, you’ll be treated to a cinematic sequence where you have dinner with the Slotfather and his team, where they’ll congratulate you on your hard work and award you a cut of the profits in the form of instant bonus credits.