Nothing is more glamorous than being a rock star. Big money, endless fame, beautiful groupies: what’s not to like? RockStar captures this feel, putting you in the shoes of a rock-and-roll legend. You’ll get to experience everything a superstar musician does, including playing music in front a wild crowd that’s hanging on your every note. With one of the most fully fleshed-out themes we’ve seen in any slot machine, and the opportunity to win some enormous prizes with the help of some multiplier symbols, RockStar is one of the best 3D slots on the market today. 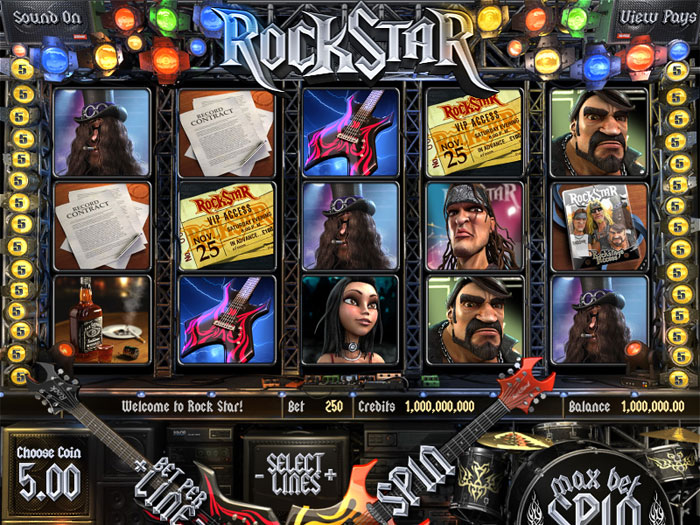 RockStar is a five-reel, 30-line slot machine that allows players to bet between one and five coins per line. This slot is a part of Betsoft’s 3D slots collection, meaning you can expect to see animations, voice acting and music throughout the game – especially considering this game is one of the newer entries into the collection.

The object of the game is to match symbols, starting on the left side of the reels and continuing along your active paylines. In order to win a prize, you’ll need to match at least three symbols consecutively. Symbols include the four members of the band, along with all the trappings of rock stardom – magazine covers, record contracts, groupies and alcohol, for instance.

As with other Betsoft games, there are also a handful of special symbols that you can hit in order to activate special features. For example, if you can hit three or more guitars on any single payline, you’ll unleash the Epic Solo mini-game. This “click me” feature will reward you with instant bonus credits after you choose one of the electrified symbols on the reels.

One of the simplest – yet most rewarding – bonus features comes when you land some records on the reels. Gold and platinum records are the ultimate signs of success in music, and they’re also very valuable on the reels, as they both count as wild symbols. These symbols can substitute as part of any standard combination, and actually multiply your normal winnings. A gold record will double the value of any winning combination, while a platinum record comes with a 5x multiplier. Hit both on the same payline and you’ll get a full 10x multiplier on your winnings.

Theme and Presentation in RockStar

RockStar is all about the music, and that comes across in every aspect of the game. The reels are placed up on stage surrounded by instruments, equipment and flashing lights, and the entire game takes place with guitar riffs playing in the background. In fact, when you first load up the game, you’ll see an animated sequence where the band prepares for their next show, and you’ll begin playing while listening to a hilariously generic version of a rock song that’s all about being a rock star.

The bonus rounds do an especially good job of exploring this theme, as all of the games are music-related. Whether you’re playing a rhythm game or listening to an epic solo, this game is all about rocking out – and it’s engaging enough that you might just find yourself nodding your head along to the game’s soundtrack.

With no progressive jackpot linked to RockStar, the biggest wins possible come in the bonus games that we’ve described throughout this article. However, there are a few big wins to be found on the reels as well, especially if you can line up a few of the band members on an active payline. Five of the lead singer (the blonde) will earn you 500 credits for every coin you wagered. However, if you can fill up a payline with any of the other band members, that’s not too shabby either; they’re each worth 400 credits. Of course, all of these prizes can be multiplied if you hit wild symbols as part of them, meaning you could win up to 5,000 credits on a single payline.

By far, our favorite feature in RockStar is the Second Screen Bonus Game. In order to trigger this game, you’ll need to match three VIP Ticket symbols on a single payline in a winning combination. Doing so will move you on stage with the band as they play one of their hit songs.

Once the song begins, you’ll start playing a game that should remind you of a very simple version of Rock Band or Guitar Hero. Icons will move down the screen, and you’ll be charged with clicking on the right strings when the notes pass through the target zones. There will be 20 notes in all, and you’ll be graded based on how many of the notes you manage to properly click with the right timing. This is a rarity in Betsoft slots: a truly skill-based bonus game. However, that shouldn’t make you panic; the pace of the notes is calm and manageable, and even if you miss a few, it won’t affect your final reward much: we’ve won thousands of bonus credits even when purposely missing half of the notes!