Many of the most famous legends come from medieval times. These stories feature brave knights, towering castles, beautiful maidens and fantastic dragons – the kinds of tales that appeal to both children and adults. Once Upon a Time takes these stories and turns them into a fantastic slot machine game. With tons of different special features and numerous unique ways to win prizes, Once Upon a Time is a truly legendary game.

Play Once Upon a Time For Free 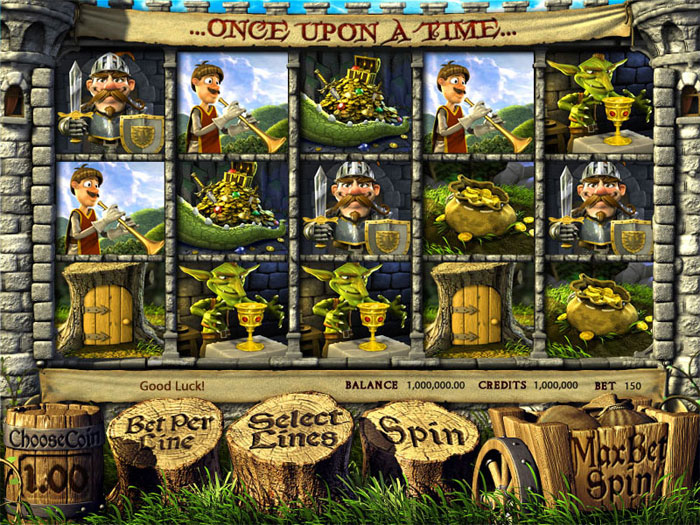 General Info about Once Upon a Time

Once Upon a Time is a Betsoft 3D slot machine that features five reels and up to 30 paylines. Players have the option of playing between one and five coins per line – up to 150 coins in total on a max bet.

The object of the game is to match identical symbols over as many of your active paylines as possible. The more symbols you match, the more you can win. There are eight different symbols that reward you win credits, from coats of arms to swords in stones and even a princess in a tower. In most cases, you’ll need to match at least three of the same symbol to win a prize, but a few of the higher value symbols do give small rewards for matching just two.

There are also a wide range of special symbols that are linked to bonus features throughout the game. The first of these is the dragon symbol. If you should find one of these dragon symbols in the top position on the third reel, you’ll trigger the Fire Starter Wild Reel, which makes the entire third reel wild! If one of the dragon’s treasure symbols is also on the reels, your wild reel will carry over to the next spin.

Another symbol to watch out for is the tree house. This symbol can active a feature known as Those Crazy Goblins. This is a fairly typical free spins mode, where you’ll be rewarded with a number of automatic free spins. It’s also possible to retrigger this mode by landing more tree house symbols during the free games.

Some of the special features in Once Upon a Time are based on combinations of symbols. For instance, if you land a knight next to a princess anywhere on one of the three main paylines, they’ll share a kiss – and you’ll earn an instant reward of bonus credits.

Landing three sacks of gold anywhere on the reels will activate the Greedy Goblins click me game. You’ll be prompted to click one of the sacks, which will reveal an instant credit prize. You’ll have the option of continuing to choose sacks and earning more and more credits until you find the “collect” symbol, at which point the game will end.

One of the two second screen bonus games is the Save the Princess bonus round. This feature is activated if you can land three or more knights on the same active payline. In this game, you’ll help the brave knight rescue the princess, and earn a reward of bonus credits for doing so! We’ll talk about the other second screen game – Goblin’s Treasure – in our favorite features section.

Theme and Presentation in Once Upon a Time

Once Upon a Time is one of two Betsoft games that use a fairy tale theme. However, while Enchanted has a feel that’s more Grimm’s Fairy Tales, Once Upon a Time focuses more on a Camelot-style tale of knights, dragons and castles. The main screen with the reels is placed on a castle backdrop, and the graphics are mostly bright and cartoonish. The music is just as light and playful, and the game’s animations are cute. The whole game simply has the feel of a children’s cartoon about medieval times, which makes it a lot of fun to play through.

Top Payouts on Once Upon a Time

In most fairy tales of this type, there’s a princess that needs saving – and Once Upon a Time is no exception. If you want to strike it rich, you’ll want to find as many princess symbols as possible; five covering an entire payline will reward you with 500 credits per coin wagered. Another big prize comes from the dragon’s treasure – five of these icons will earn you 400 credits.

Favorite Features in Once Upon a Time

There are a ton of bonus rounds in Once Upon a Time, but if we have to pick one to name as our favorite, it would have to be the Goblin’s Treasure Bonus Round. In this game, you’ll watch as goblins sneak into the castle and steal as many of the valuables they find there as possible. You’ll pick three different items to steal, each of which will reward you with a different number of instant bonus credits. At the end of the game, all of these credits are totaled up and added to your winnings. 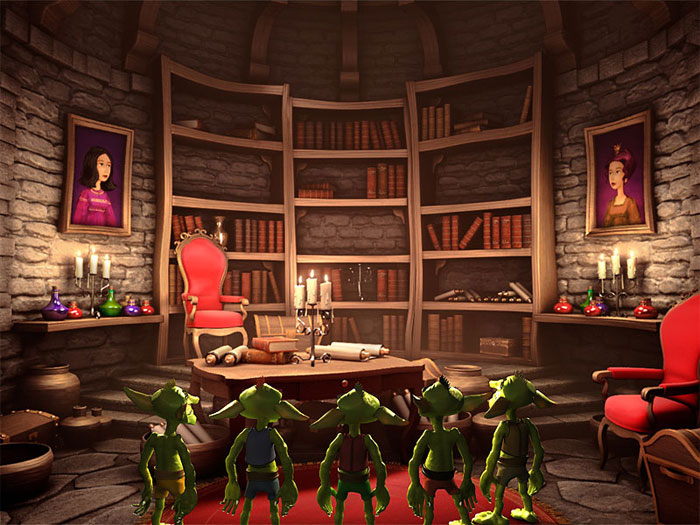 >>> Play Once Upon a Time for real money now at www.BetOnline.com <<<