If you want to gamble, everyone knows where to go: fabulous Las Vegas! The land of resort casinos, high rollers and exciting night life is fully explored in Mr. Vegas, a slot machine that puts you in the shoes of a VIP casino player. With tons of mini-games, an atmosphere that doesn’t take itself too seriously and lots of big payouts, Mr. Vegas will help tide you over until you can make your next trip out to Sin City. 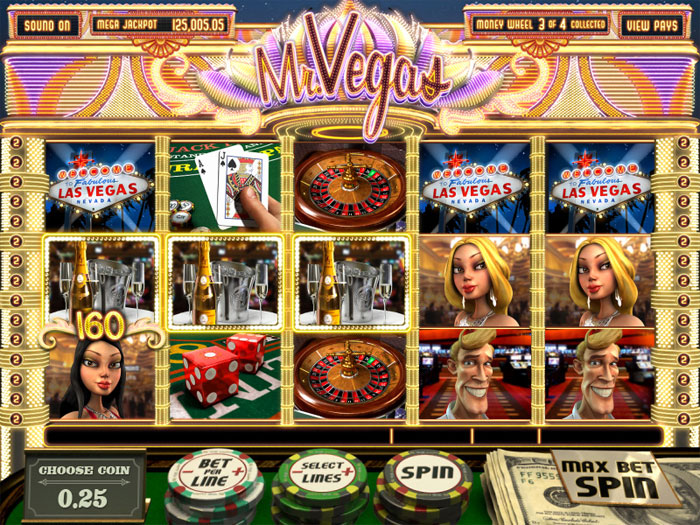 Mr. Vegas was developed by Betsoft Gaming and is actually one of the most popular 3D slots online.  The game is played with five reels and three rows of symbols, and players have the option of playing up to 30 different paylines. Each line can be played for up to five coins, with coin denominations ranging from $0.02 to $0.50. In order to win prizes, players must match consecutive symbols from left to right. The symbols are themed after gambling and Las Vegas, of course; you can win a few dollars by matching cards, coins and roulette wheels, or take home the big bucks by hitting dealers, beautiful women and showgirls.

There are also several special symbols and combinations that will allow you to win instant cash or enter special bonus rounds. For instance, landing the dice directly to the left of the right of Mr. Vegas will trigger a bonus game based on the popular casino game of craps. Mr. Vegas will roll the dice, and the number that comes up will determine the number of free spins you’ll receive. Roll doubles, and you’ll also earn a 2x multiplier during your free spins.

Another fun feature is the Money Wheel Jackpot. During your play, you’ll notice that some of the symbols on the reels have a little slab icon in the upper-right corner. If you hit five of these during the same spin, you’ll get to take a spin on the money reel, which will earn you one of a variety of different prizes – anything from free spins, trips to other bonus rounds, or even the Mr. Vegas progressive jackpot!

Another game to watch out for is the Roulette Bonus Round. If Mr. Vegas shows up on reels 1, 3 and 5 during the same spin, you’ll get the chance to head to the roulette tables with Mr. Vegas and his female companions. Choose three numbers to bet on, and if one of them comes up on the spin of the wheel, you’ll be rewarded with a huge prize.

Theme and Presentation in Mr. Vegas

Mr. Vegas is all about the high roller lifestyle in Las Vegas. This starts from the animated sequence that starts the game, in which a Vegas casino literally rolls out the red carpet for him, to the lounge singer you’ll hear crooning in the background while you play. The bonus games also work hard to fit into the slot’s casino theme; in different bonus games, you’ll get to play craps, roulette, and even another slot machine.

The biggest payout possible on the reels during Mr. Vegas comes if you can hit five of the showgirl symbol on any active payline. This combination will trigger a win of 500 credits per coin, which can be as much as $1,250 if you play for the maximum amount allowed. However, that’s not the only big reward waiting out there for you; a five-of a kind on either of Mr. Vegas’ lovely ladies will earn you 300 credits. You can also win a 300-credit prize by hitting four showgirls.

There’s also a progressive jackpot that can be triggered during the Money Wheel Jackpot game. This is usually the largest prize available anywhere in Mr. Vegas; at the time of this writing, the jackpot was currently over $5,000.

There are a lot of special features included in Mr. Vegas, several of which we’ve described above. But by far, our favorite bonus round is the Mini-Slots feature. This bonus game is triggered whenever you hit three or more of the slot machine icons on an active payline. When you do so, you’ll immediately begin a miniature slot machine game that takes place on top of the regular slots interface.

In contrast to the fast-paced action and fancy graphics of the normal Mr. Vegas slot machine, this miniature version of the game is made to emulate the older style, classic Vegas or Atlantic City mechanical slots. It has just three reels and a single payline, and the symbols are the same ones everyone has associated with slot machines since the beginning of time: bars, sevens and cherries. You’ll be given three free spins on the machine, and if you hit a winning combination, you can win hundreds or even thousands of bonus credits! This game is incredibly fun for how simplistic it is; there’s something about the old-fashioned slot machines that’s just plain enjoyable in a different way that the more complex and graphically-intense games we usually play today.