Mamma Mia is one of the latest 3D slots from Betsoft Gaming, and features some sharp innovations that show how this line of games has grown over the years. Not only does this game have a lot of flavorful features that will help you get absorbed into the slot’s Italian restaurant theme, but there are additional gameplay elements that are truly unique to this slot and give the player unparalleled control over how the game plays. If you’re interested in seeing the latest in slot machine features and presentation, Mamma Mia is definitely worth taking for a spin. 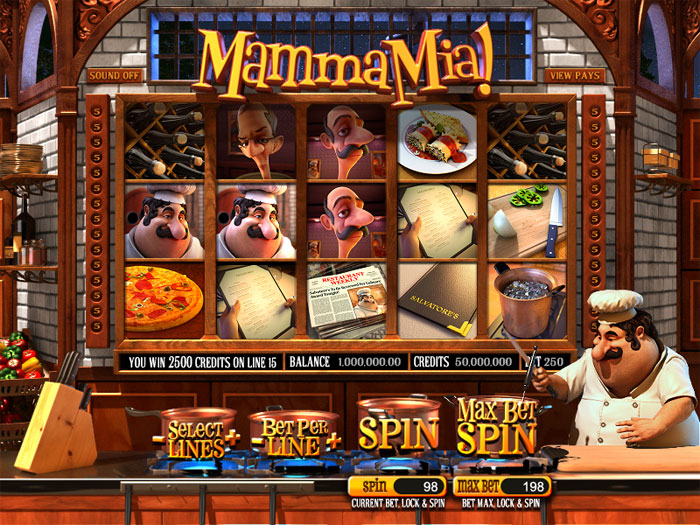 Mamma Mia is a five-reel, 30-line slot machine by Betsoft Gaming, and it is actually one of their newest 3D slot machines. Each line can be played for up to five coins, with coin denominations ranging from $0.02 to $0.50.

Normally, this would mean that the maximum bet on this machine would be $75, but there’s a unique feature that dramatically changes how much players are permitted to bet per spin. Before each spin, players can select as many positions on the reels as they like and lock those positions in as wild spaces. Of course, each wild symbol on the reels means that you’re more likely to win, but it also comes at a price; you’ll have to spend more credits to play that spin, even though you’ll still receive the same prizes when you hit winning combinations.

The exact amount that each wild costs you to add will depend on the position you’ve chosen to make wild. For instance, a normal max bet spin costs 150 credits to play (five coins each on 30 lines). Add a locked wild on the center position of the second reel, and the spin will now cost 411 credits to play instead. On the other hand, a wild on the center position of the fifth reel is much less costly, bringing the cost up only slightly to 151 credits. You can choose to lock as many or as few wild positions as you like before each spin; the game will prompt you to make sure you’re okay with the cost of the spin if it grows to more than five times the normal price. Obviously, having more wilds leads to more big wins, but also much greater expenses.

There are a few special symbols that can lead to bonus rounds being triggered. Three pizza symbols activate a free spins mode, which we’ll talk about in more detail below. If you match three or more food cover symbols, you’ll activate a “click me” game that awards instant credits. Finally, three or more menu symbols will start the Critic bonus round, in which you’ll help the chef prepare a dish that will be judged by the critic. The better the review, the more money you’ll win!

The theme of Mamma Mia has you placed in an Italian restaurant, helping the head chef as he creates meals for his customers — and at least one harsh food critic who is difficult to please. The main game screen takes place in the kitchen, where you’ll see the animated chef tasting his food and adding extra ingredients to his latest dish. The graphics for the game are soft and colorful, in the style of a friendly family restaurant. The sounds also compliment the theme well; along with a bit of light Italian music, you’ll hear boiling water and the sounds of a kitchen in the background. The game’s special features utilize animations that take place inside the restaurant, further drawing you into the game’s atmosphere.

The biggest standard payout in Mamma Mia comes when you hit five chefs on any active payline. This triggers a win of 500 credits per coin wagered on that line. The next biggest prize is a 250 credit win if you hit five critics.

However, while these are the largest standard payouts available, there is another feature that gives you the chance to win even bigger — which we’ll talk about in the next section.

Perhaps the coolest feature in Mamma Mia is triggered when you hit three or more pizza symbols anywhere on the reels. This activates a free spins mode that’s a unique take on what is normally a fairly standard feature in a lot of slots. In this bonus round, you’ll be taken to a second screen in which a completely new set of reels are used. The head chef will work on making a pizza, and the symbols on the reels will be entirely composed of the seven ingredients he’ll use in his creation.

Not only do the fewer symbols mean that there’s a better chance of landing a winning combination, but some of the prizes are even larger than the ones available during normal gameplay. For instance, hitting five slices of pepperoni will earn you 1,000 credits per coin wagered – the largest prize available anywhere in Mamma Mia.