If you’ve played the Mad Scientist slot game at any Betsoft casino, you know just how much fun winning money while experimenting with science can be. Now, Betsoft is back with a second game called Madder Scientist that takes the same theme and brings it to a whole new level. The experiments are crazier, the special features are wilder, and the graphics and animations are better than ever – all of which make Madder Scientist one of the most interesting new slots on the market. 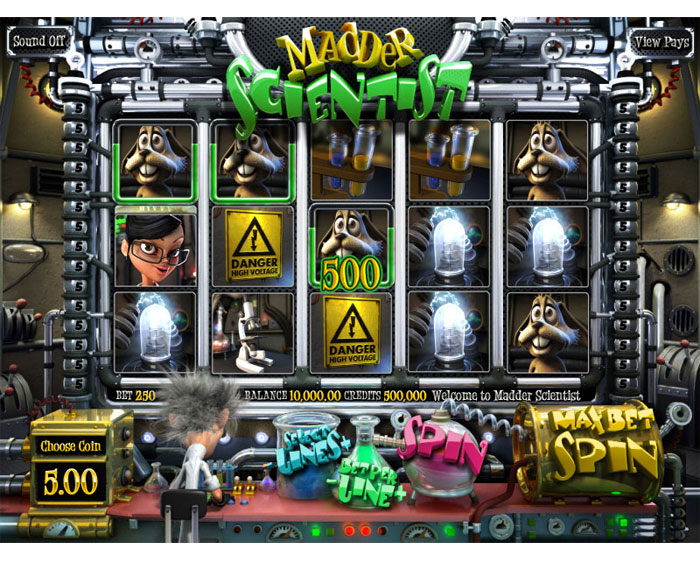 Madder Scientist is a 30-line, five-reel slot machine available at Betsoft-powered casinos. Players can choose to play any number of lines, and may wager between one and five coins on each payline.

The object of the game is to match any of the instant winning symbols from left to right across your active paylines. The symbols in this game all fit within the science lab theme: vials of chemicals, magnified cell cultures, and danger signs. For these lower-value symbols, you’ll need to hit at least three-of-a-kind in order to score a win. For higher value symbols – like the scientist and his lab assistant – just two will do, but the biggest prizes are reserved for making five-of-a-kind.

In addition, there are three different special symbols which are tied to bonus features. First, there’s a beaker filled with green liquid. Hit three beakers (one each on reels one, three and five), and you’ll be allowed to play a Click Me game in which you choose beakers to reveal prizes. Each beaker hides a different number of instant bonus credits, and you’ll be given the option to continue choosing more beakers until you reveal one with the word “collect.”

Another symbol that can earn you big rewards is the switch. If you hit three switch symbols anywhere on the reels during a single spin, you’ll activate the Wild Switches feature. One of the five reels will instantly become a wild reel, and will remain locked as wild for a set number of spins.

Finally, the carrot symbol is your key into the second screen bonus round. If you see three or more carrots on the reels during any spin, you’ll be taken into the scientist’s lab, where you’ll help choose different components to put into his latest concoction. During each step of the experiment, you’ll earn instant bonus credits. At the end of this bonus feature, you’ll watch the results of your concoction on a carrot. Depending on whether you create a silver, gold, or diamond carrot, you’ll earn even more credits! This game can result in thousands of instant credits, making it a very lucrative special feature.

Madder Scientist uses the same “basement lab” motif found in the original Mad Scientist game. On the main gameplay screen, you’ll see the scientist himself working in his lab, moving around and celebrating every time you manage to score a win. The sounds and music are rather light, with just a few bubbling vials and a muted musical score in the game’s background. Overall, the presentation here is strong; the theme shines through clearly, and while the graphics and animations aren’t among the most impressive in the Betsoft 3D slots line, they’re more than good enough to provide a crisp and fun slots experience.

There are two ways to win big prizes while playing Madder Scientist. The first, as we’ve already discussed, is through the second screen bonus game. However, even that game will rarely award as much money to players as a couple of the prizes that are available right on the reels.

In fact, both the scientist and his lab assistant are equally valuable, provided you can land five of either one on a single payline. In both cases, this combination is worth 500 credits for each coin you’ve wagered. Bet the full five coins, and that’s a prize of 2,500 credits!

Without a doubt, our favorite feature in the Madder Scientist slot machine is the respin option. After you complete a spin and prizes have been awarded, you’ll be given the option of respinning any one reel of your choice. This is entirely optional, and can be triggered by clicking the respin button at the bottom of each reel.

However, not all respins are made equal. Every time you choose to respin, that comes with a cost, which is made clear before you choose to respin that reel. This cost can range from a single credit (usually when a respin can’t possibly result in you winning a prize) to several hundred credits, depending on your likelihood of winning a prize or starting a bonus round.

You can keep respinning the reels of your choice as often as you like, up until the point in which you trigger one of the game’s bonus features. At that point, your opportunity to respin will end, and you’ll need to begin from scratch by spinning all of the reels. 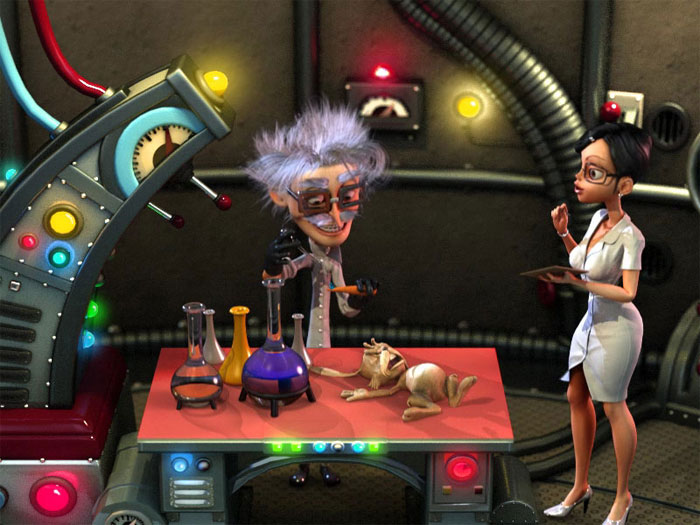