Secret underground laboratories, crazy experiments, and an old scientist in a white coat. You’ve seen all the signs before: this guy is a mad scientist! In the Mad Scientist slot machine, you’ll be working hand-in-hand with just such a man, who is clearly working on some secret stuff out of his basement. However, instead of trying to rule the world or cure disease, this scientist is mad for wealth, as his experiments are all about turning ordinary objects into pure gold!

While Mad Scientist isn’t the prettiest of the Betsoft slot machines, it’s definitely a cute game that has plenty of charm and isn’t afraid to be a little silly. But there’s absolutely nothing funny about the prizes offered in this game. Any slot machine fan will want to experiment with this machine, which can make you a fortune both in the normal run of play and during the game’s exciting bonus rounds. 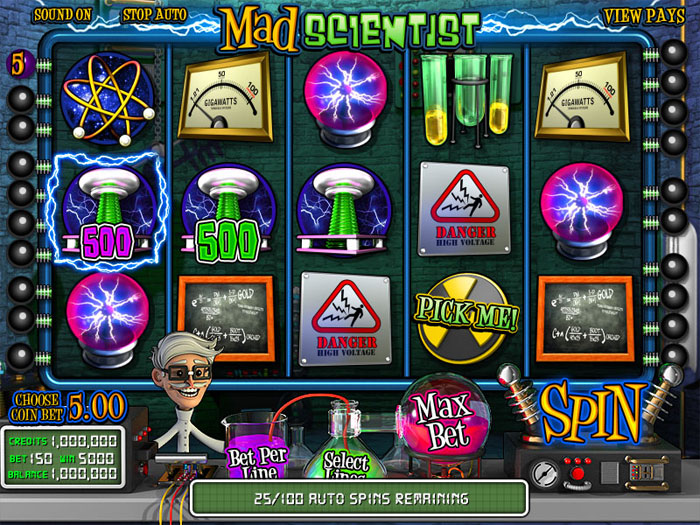 Mad Scientist is a 3D Slot machine by Betsoft. This game features five reels and up to 20 paylines, each of which can be played for one to five coins. The object of the game, as always, is to match identical symbols consecutively across any of your active paylines. Players can win prizes by matching three or more of the same symbol, starting either from the left or right reel.

In Mad Scientist, all of the symbols are based on science-themed objects. There are seven standard symbols that award prizes simply by matching them, from the lowly flask to the highly valuable lightning ball. Unlike many Betsoft games, however, Mad Scientist also features both scatter and wild symbols. The scatter is represented by a lever symbol; it will earn you a prize if you match three or more anywhere on the reels, regardless of where on the screen they’re located. In addition, there’s a chalkboard symbol that can substitute for any of the standard symbols.

If that weren’t enough, there are also a few special symbols and combinations that can trigger bonus round. For instance, landing Tesla coils on the same line (the three main paylines only) on both the first and last reels will trigger thee Wild’o’Cution feature, which will turn all of the icons between them wild before paying you your winnings.

Another popular feature is the Bio Pick Me game. This classic click me game is triggered whenever you hit three or more biohazard icons on the same active payline. You’ll be prompted to choose one of the icons, which will reveal an instant prize of bonus credits.

Finally, there’s also a second screen bonus round known as the Great Experiment, which you can get into by hitting three or more of the experiment icons anywhere on any active payline. We’ll talk a little more about this game later in the review.

Theme and Presentation in Mad Scientist

Mad Scientist was one of the earliest 3D slots created by Betsoft, so it doesn’t feature many of the graphical innovations you’ll find in their newer games. Still, it does have the always present animations that are present whenever you win, and there are also a few nice graphical touches when you play the bonus rounds. The graphics are colorful and cartoonish, and sounds are limited to a few mild sound effects when you spin the reels or win a prize. Nonetheless, the game has plenty of charm, and you’ll definitely get the feel of experimenting in a scientist’s secret underground lab during the game. It almost looks like something out of a 60’s science fiction film – though without any monsters that might be accidently unleashed on an unsuspecting public.

There are no progressive jackpots in Mad Scientist, but there are still some huge payouts available if you hit the right combinations of symbols on the reels. The lightning ball is the most lucrative of all of the symbols; should you hit five of them on a single active payline, you’ll earn 1,000 credits for every coin wagered. Another valuable symbol is the atom, which awards prizes of up to 500 credits.

By far, the feature we had the most fun with in Mad Scientist was the Great Experiment Bonus Round. Triggered whenever you hit three or more experiment icons anywhere on your active paylines, this game takes place on a second screen. In the game, you’ll help the scientist test his “turn-to-gold” serum by placing objects into the serum and seeing what happens. You’ll have to dip all four items into the serum, each of which will turn into bronze, silver or gold. At the end of the game, you’ll be rewarded with bonus credits. This game is especially lucrative if you activate it with four or five experiment icons, in which case your winnings in the game will be multiplied. 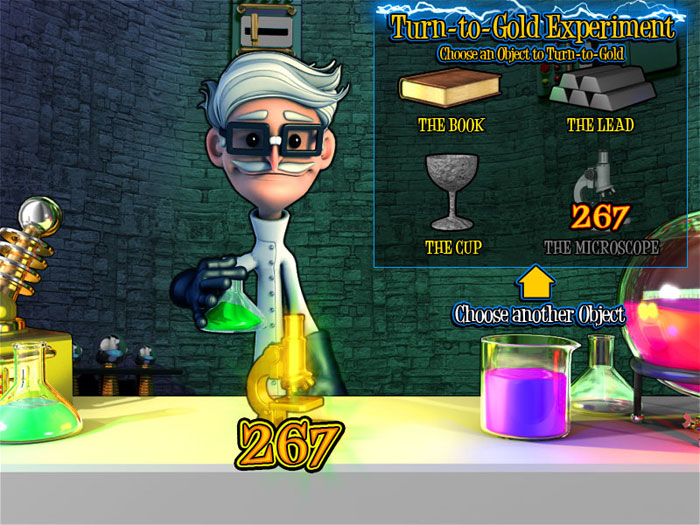