Imagine taking a trip to Egypt, wandering the desert, and coming across some ancient ruins. You enter, finding rooms filled with riches that haven’t been seen by humans in thousands of years. But when you explore deeper, you find that not all mummies have been put down to rest for good!

That’s the idea behind Betsoft’s new 3D slot machine, Lost. In Lost, players can win prizes while finding treasures and avoiding an angry mummy. With plenty of surprises on every spin and a fun theme, slots fans will love the adventure and excitement Lost brings to the table each and every time they play. 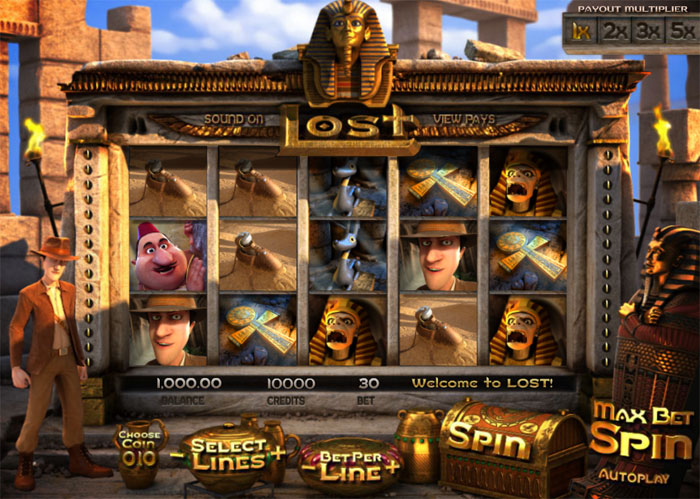 Lost is a 3D slot machine by Betsoft, and features the same advanced graphics and animations that are found in most of the games in this line. This particular game is a 30-line, five-reel slot machine that allows players to wager up to five coins on each line. A large variety of coin denominations in every currency supported means that most players will be able to structure the game to fit into their budget.

If you’re familiar with the basics of slot machines, you shouldn’t have any trouble getting started with Lost. The object of the game is to match three or more of the same symbol on any active payline. All winning matches must be made with consecutive symbols starting on the first reel and running left to right. Each symbol comes with its own prize; matching ankhs, for instance, will award a small prize, while five mummies will earn you a much more substantial reward. Seven different symbols in all will award you with a win, each of which offers a different level of prizes.

While Lost might be missing a scatter win or a “normal” wild symbol, this game has plenty of ways for you to find bonuses or increase your winnings. First, there’s the staff symbol, which does act as the game’s only truly wild icon. The staff symbol only appears on the center reel, but when it does land there, it will expand to fill the entire reel. This will make the entire third reel wild, combining with any of your standard symbols to make winning combinations. In addition, all of these wins will come with a 2x multiplier, doubling your rewards.

Next up is the Monkey Click Me game, a simple “pick one” game that you’ll get to play whenever the monkey symbol appears on the fourth reel. This will cause the monkey to jump around and activate a variety of symbols on the reels. Choose one, and you’ll instantly be rewarded with a prize of bonus credits.

One of the coolest features in Lost is one that you should be able to see a lot of: the Center Reel Respin. This will be activated every time you score a regular win on the reels. When this occurs, you’ll see the payout multiplier increase (from 1x to 2x, 3x, and eventually the maximum of 5x), and the center reel will respin for free. If you have new winning combinations when the reel stops, you’ll win prizes that include the current multiplier, and the process will repeat itself: the multiplier will increase, and the reel will spin again. No matter how many times you win, this will continue to happen until you finish a spin without any winning combinations.

Finally, Lost also includes a second screen bonus round that’s known as the Mummy’s Tomb Bonus. In this game, you’ll be transported into a tomb where you’ll be given two doors to choose from. Each one will reveal a hallway that could lead to a new room filled with treasure (and another choice of two doors), or a dead end that will find you face-to-face with a mummy. The game will continue until you find a mummy; the longer this takes, the larger your ultimate reward is likely to be.

The only real feature missing from Lost is a progressive jackpot, which limits the maximum wins you can receive on any given spin. However, that doesn’t mean there aren’t some ways to score big wins, especially with the help of the payout multiplier. Five archeologists on the same line will grant you a prize worth 500 credits for each coin you wagered — up to 2,500 credits if you make a maximum bet. When you factor in the ability to win larger and larger prizes thanks to the multiplier, you should be able to imagine how it’s possible to quickly build up some amazingly large prizes with just a little luck!

Theme and Presentation in Lost

While Lost isn’t the single most impressive Betsoft slot, the graphics are still some of the best around. There’s no voice acting and only some limited music and animations, but that’s okay — the graphics are sharp and do a great job of bringing out the Egyptian theme. The underground tomb scenes feel appropriately foreboding, while the background for the main reels, located aboveground, do a great job of mixing an exciting feeling of adventure with the possibility of danger lurking around the corner.