If you hear the phrase House of Fun, you’ll probably think of a carnival funhouse, or maybe even the classic bounce house that everyone’s jumped in at least once in their life. Unfortunately, the house in this slot machine is a little less friendly. With a cast of creepy characters and plenty of scares, House of Fun is more like a house or horrors – one where only the house’s inhabitants are having fun at your expense.

In this game, you’ll follow a young couple and their dog as they try to brave the spooky, strange, and just plain weird House of Fun. While they might have a tough time of it, though, the game really is a lot of fun for players – both due to the interactive bonus games and the huge piles of cash you just might be lucky enough to leave with.

Play House of Fun For Free 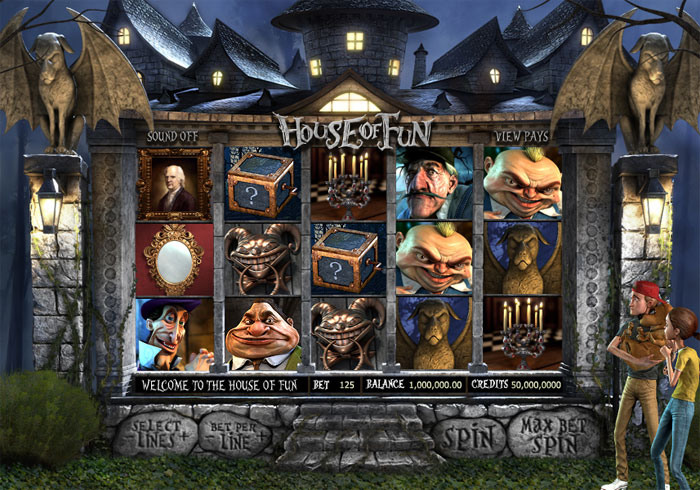 General Info about House of Fun

House of Fun is a Betsoft 3D slot machine that features the same great animations and graphics found throughout that line of games. It’s a five-reel slot machine with 30 paylines, which players can choose to play for anywhere between one and five coins at a time.

The object of the game is to match identical symbols from left to right consecutively across your active paylines. There are nine different standard symbols in total, each of which will award different prizes to you when you match three or more of them (in some cases, just two symbols will do). These symbols not only include the people who live and work in the House of Fun, but also many of the creepy items you’ll find around the house, like gargoyles, moving paintings, and spooky mirrors.

In addition, there are a number of different bonuses that can be triggered only by matching special symbols. The first of these is the jack in the box. Three boxes will trigger a free spins feature that lasts for several spins. Not only can you win credits during these spins without spending a dime, but the center reel will remain entirely wild through the whole free spins game.

Next up is the Mad Hatter symbol. Technically, this doesn’t count as a special symbol, since there’s a normal prize associated with him as well. However, landing three or more Mad Hatter symbols on any of the three main paylines will also trigger a “click me” game in which you’ll get to pick between all of the hatter symbols. Each time you make a choice, you’ll be rewarded with a number of instant bonus credits. But the prizes don’t end there; you’re allowed to continue clicking on hatter symbols until you find one that has the word COLLECT hidden behind it, which signals the end of the game.

The final special symbol is the door knocker. This symbol triggers the Escape bonus round, which we’ll talk about more below.

Theme and Presentation in House of Fun

House of Fun is set up just like a classic horror movie – with a little charm thrown in to make sure this slot machine still feels like a game. The cast of characters you’ll meet inside the house is legitimately spooky, and some of the animations you’ll trigger when you win a prize may actually creep you out a bit the first time you see them! The opening animation sets up the story of the game perfectly – the couple and their dog are stranded near the house when their car breaks down – and the rest of the game does a great job of expanding on that theme without being intrusive or getting in the way of the action. Even if you don’t normally care about a slot’s theme or presentation, you’ll probably get a laugh the first time our “heroes” run and hide after a winning combination triggers a scary animation. 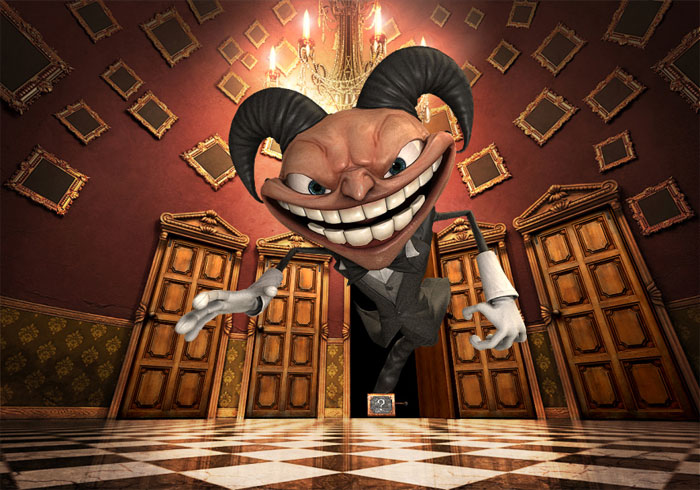 Top Payouts on House of Fun

While House of Fun is a great game, one area where it has a slight deficiency is in the number of high-value payouts you can receive on the reels. You can occasionally win big in the game’s special features, but the biggest wins in the main portion of the game are rather modest.

If you are looking for a big payday, your best bet is to hope for some of the house’s inhabitants. Two of those characters carry a prize of 150 credits per coin wagered if you can hit them on all five reels, which is the largest payout available during standard spins.

Favorite Features in House of Fun

The coolest feature in this game is definitely the Escape Bonus Round. This game begins whenever you manage to hit three or more door knocker symbols on the same active payline. When this occurs, you’ll watch Paul, Jane and their dog lose their way in the mansion, and end up in a room with five doors. Your job is to pick a door and see what happens! You’ll keep moving from door to door until you finally escape from the mansion, at which point you’ll be rewarded with a large number of instant bonus credits.