Sometimes, winning big on a slot machine can feel a little bit like robbing a bank. If just any old slot machine doesn’t give you that feeling when you lock in a big win, Heist certainly will, as robbing banks is what this slot machine is all about! You’ll use all the tools in a thieves arsenal to enter and escape from a high security vault, all while attempting to evade a cop that’s right on your tail. With a combination of amazing presentation and smooth gameplay, Heist is one of the most engaging slot machines you’ll find in Betsoft casinos. 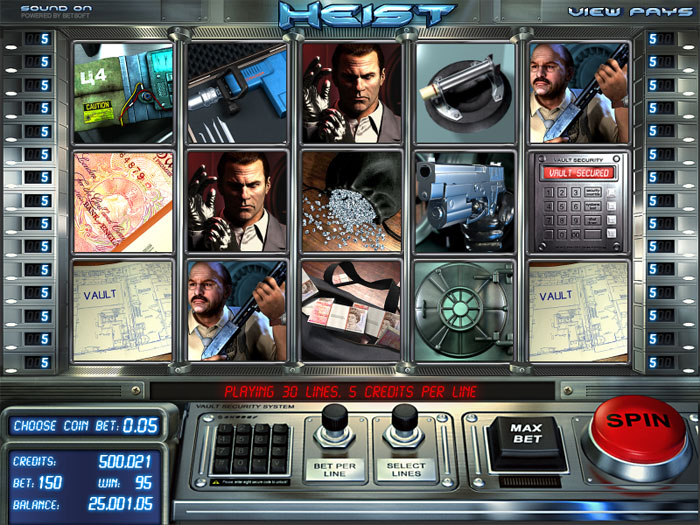 Heist is a Betsoft 3D slot machine that features the standard five-reel, 30 payline gameplay that’s commonly found in that line. Players have the option of playing anywhere between one and five coins per line, with winnings being adjusted accordingly. The object of the game is to win money by matching identical symbols from left to right on your active paylines. Most symbols require three in a row to score a win, but the game’s two main characters (who are also the highest value symbols) award prizes even if you match just two symbols.

There are nine total symbols that you can match on the reels to win instantly. These range from the aforementioned main characters to items you might use in a bank robbery, such as blueprints, stopwatches and guns, along with the valuables you might find hiding in the vault. In addition, there is a scatter symbol – a drill – that awards wins for hitting three or more anywhere on the screen.

Heist also has a few special symbols that trigger extra features or bonus rounds. First, there’s a glass cutter symbol. If you hit three or more of these on an active payline, you’ll trigger a “click me” game in which you’ll be prompted to choose one of the glass cutters. Once you make your choice, you’ll be rewarded with one of three possible prizes: instant bonus credits, a number of free spins, or instant access to the second screen bonus round.

You’ll also want to watch out for the C4 symbol. When these explosives are positions on the center position of the third reel, they’ll blow up, creating an entirely wild third reel that comes with a 2x multiplier on all wins. If you’re especially lucky, the wild reel might even stick around for a second spin! In addition, there’s a vault icon that can trigger the very fun second screen bonus that we’ll talk about in the favorite features section.

Theme and Presentation in Heist

Heist may have the most well-developed theme of any Betsoft games. When the slot machine first loads, you’ll be greeted by a voiceover that sounds like it could be the trailer to a Hollywood film. The two main characters of the game – the thief himself, Neil Quaylan, and the detective tracking him down, Albert Kowalski – actually feel like adversaries straight out of an Oceans Eleven style heist film.

Graphically, the game takes place in a vault, and uses colors, style and fonts that are modern and high-tech, which is appropriate given the theme. If anything, the animations in the game might be a little understated, but that hardly matters given the slick graphics and sounds. The music for the game is dramatic and tense – perfectly setting the mood and drawing you further into Heist’s world.

One area where Heist is surprisingly lackluster is in its standard payouts. While this is more than made up for by the high-paying special features, it does mean that you’re unlikely to ever win a big score on a normal spin. However, there is one big prize worth watching out for; if you should hit five of the drill scatter symbols anywhere on the reels, you’ll win 300 credits per coin wagered.

The biggest wins available from the standard paying symbols come from hitting Quaylan or Kowalski themselves, each of which will pay out 60 credits per coin wagered if you should manage to hit them on all five reels. While that may not sound like a lot compared to other games we’ve profiled, keep in mind that the game is designed to reward you with more frequent wins, so over the long run, you can expect to win about the same amount as in other Betsoft slots.

While there are quite a few exciting features in Heist, the most enjoyable one is the Vault Bonus Round. In this game, you take on the role of Neil Quaylan as he attempts to break into a bank and escape with the biggest score of his life. You’ll get to choose between several methods of trying to enter the vault, and then you’ll watch as Quaylan goes through with the robbery. If he manages to take the money and escape before Detective Kowalski captures him, you’ll be rewarded with a big score of your own! 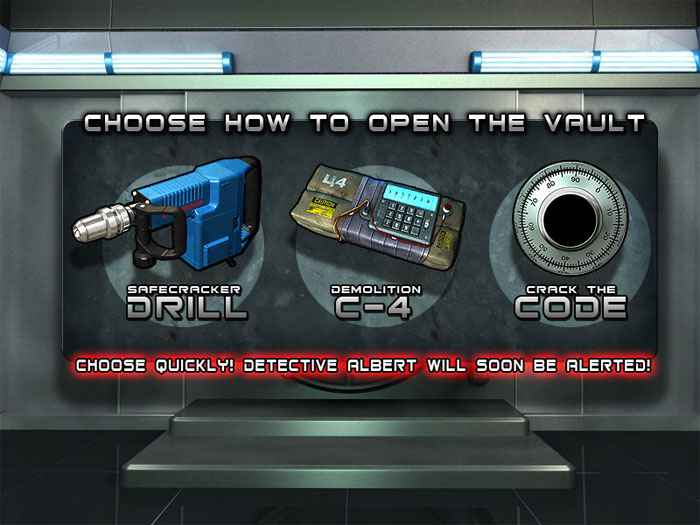