The modern definition of a “gold digger” has more to do with beautiful women taking advantage of foolish (but rich) men. But it wasn’t too long ago when actual gold diggers were searching through dangerous mines and caves, searching for a mother load of gold that would set them up for life.

In the Gold Diggers slot, you’ll actually get to deal with both meanings of the word, as two men go searching for precious metals in an attempt to help make a female friend very rich. But in the end, it’s the player who will ultimately take home the real rewards, especially if you can dig deeply enough to access Gold Diggers’ special features. With a humorous feel and plenty of fun mini-games, Gold Diggers is a perfect slot for players who like to have just as much fun playing a slot machine as winning on one. 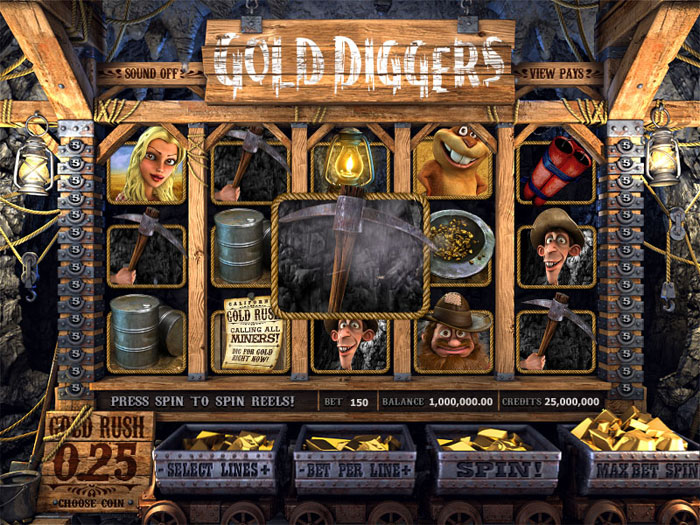 Gold Diggers is a fairly typical 3D slot from Betsoft Gaming. It’s a five-reel slot that features up to 30 paylines, and allows players to bet as many as five coins on each line. The game follows the normal slot machine conventions with few surprises; you’ll have to match symbols from left to right across the paylines, and the more symbols you match, the bigger your prizes will be.

There are eight standard symbols in the game that award instant wins, from gold mining equipment to the miners themselves. In most cases, you’ll only have to hit two or more symbols in order to trigger a prize, though a couple of the lowest-value symbols do require three-of-a-kind to win.

In addition, there are a number of special symbols that can earn you access into bonus games or other rewards. For instance, the dynamite symbols initially work just like the standard symbols: if you match three or more, you’ll win a prize of up to 200 credits. However, like any good dynamite, these symbols will then explode, allowing new symbols to fall into place and creating new winning combinations.

Another fun bonus occurs whenever you hit three or more gopher symbols in a winning combination on an active payline. This triggers the “Gopher a Dig” bonus round, which is a “Click Me” style game in which you’ll have to pick one of the gophers. Your gopher will then take a dig and come up with some bonus credits that are instantly added to your winnings!

Theme and Presentation in Gold Diggers

Gold Diggers has a heavy gold mining theme, but it also uses the double meaning of the term to have a little more fun with itself. Even the opening song for the game makes sure that you get what’s going on; it tells the story of the two miners, who have sold all of their shares to the lovely lady who is the third character in the game.

As for the presentation, the graphics are somewhat more subdued than in some other Betsoft 3D slots (there isn’t nearly as much of the 3D effect as in some of the other Betsoft games), but they’re still sharp, crisp, and easy on the eyes. The game works hard to make sure that you get into the whole mining aspect of the story, as the reels are located in the cave itself, and one of the bonus rounds even has you doing some digging yourself. The music of the game is the kind of sleepy music that’s usually associated with hillbillies or the old west – a perfect selection, since it goes so well with the characters and themes in the game.

There’s no progressive jackpot in the Gold Diggers slot machine, there are a few decent payouts on the reels that will make you a little gold mine of your own. The largest prize comes when you hit five of the bearded gold miner on an active payline. This combination is worth a full 500 credits per coin wagered. The other miner is also pretty valuable, returning 400 credits if you fill up a whole payline with his symbols. Of course, even bigger prizes can be found in some of the bonus rounds located within the game.

There are a lot of cool features in the Gold Diggers slot machine, but our favorite had to be the Gold Rush bonus game. In this bonus round, which is activated whenever you hit three Gold Rush notices on a single active payline, you’ll be sent into the mines with the miners in the search for gold. Six different locations on the rock wall will be highlighted, and you’ll be given the chance to crack open any three. Each location has a set number of bonus credits hidden behind it. At the end of the game, the credits you uncover will be totaled and added to your winnings on that spin! 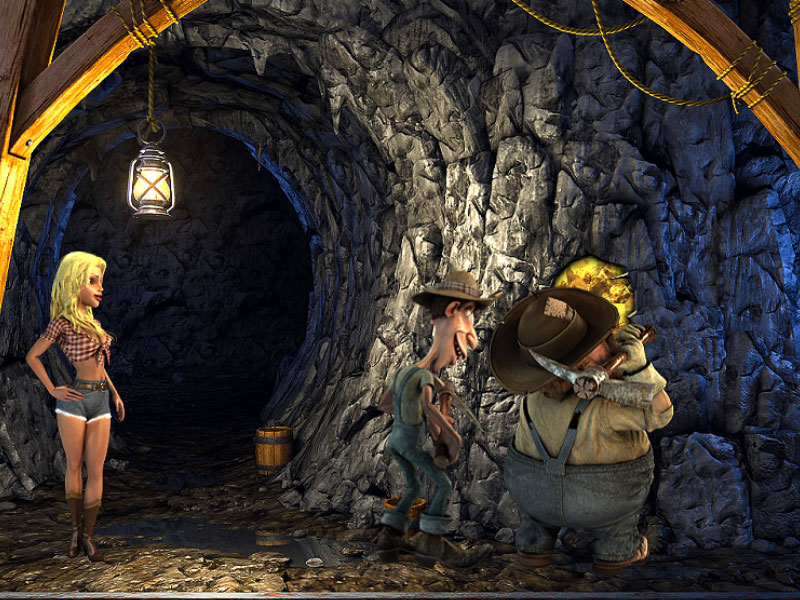