Truth be told, the life of a gladiator in ancient Rome probably wasn’t very fun. They most certainly didn’t make the kind of money a professional athlete does today, and a modern football player certainly doesn’t have to worry about anyone swinging a sword at them, or fighting a lion. But the danger is part of the romantic view we now have about gladiators – there’s something that sets them apart as the ultimate entertainers.

This feeling is at the center of what makes Gladiator such an enjoyable slot machine to play. Not only does the game feature all the imagery we associate with gladiator combat, but the sounds and sights are all there too. There’s even a battle game that puts you right at the heart of the arena, fighting for the glory of Rome – not to mention more than a few gold pieces. 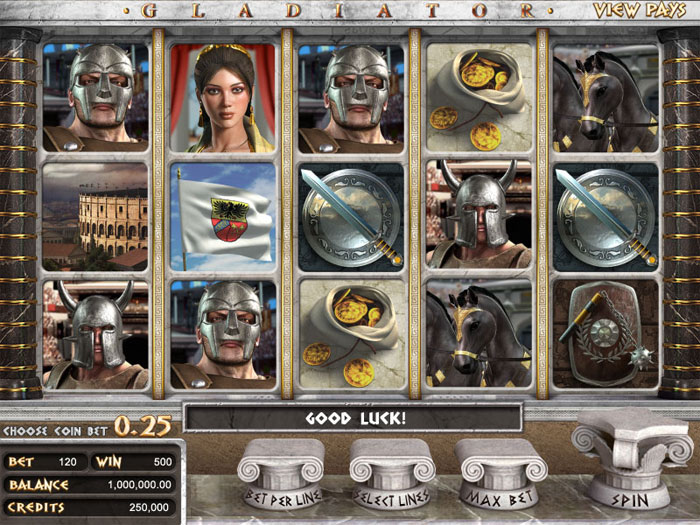 The Gladiator slot machine is one of the games in Betsoft Gaming’s 3D slots collection. Like most of the Betsoft 3D slot machines, it features five reels and 30 lines, along with the ability to play up to five coins per line. However, it does feature at least one unusual feature you won’t find in most slot machine games; you can win from either side of the reels, so combinations that start on the 5th reel count just as much as those that go from left to right.

There are nine different standard symbols that you can match to win prizes during gameplay. These symbols include weapons, gold, and even the two battling gladiators themselves. Each symbol wins only if you can match three or more of that symbol consecutively on an active payline.

There are also a number of special symbols that have different effects on gameplay. First of all, Gladiator is one of the few Betsoft games that include a true scatter symbol. Match three or more coliseum symbols anywhere on the reels and you’ll instantly win a large prize.

Next up is the princess symbol. If this symbol is placed in the top position on any reel, it will trigger a 2x multiplier wild feature. The symbols on the reel below the princess will turn into 2x wild symbols, which will not only increase your chances of winning, but will also double your winnings on any combinations using those symbols!

A similar feature can be activated when you hit the Hero Gladiator anywhere on the center reel. If this occurs, a marble slab will appear over the third reel, which our hero will come out and smash, revealing an entirely wild reel. That reel may even be carried over onto the next spin, giving you another spin with a wild 3rd reel.

Three or more door symbols on an active payline will trigger yet another of the popular Betsoft “click me” features. In this case, you’ll get a chance to click doors, revealing instant credit prizes. You’ll get a chance to continue doing so until you unlock a door that has a COLLECT symbol behind it.

Theme and Presentation in Gladiator

There are no surprises here – the Gladiator slot is about (what else?) gladiators. The game takes place on a screen with Roman architecture, and as you’re loading the game, you’ll be treated to a voiceover that speaks about the glory of being a Gladiator in the coliseum. There’s certainly an epic feel to the game, which is only enhanced by the appearances made by gladiators in the bonus rounds. There is definitely a sense that some of the game’s aesthetics were influenced by the popular 2000 movie Gladiator, which won the Oscar for Best Picture. However, this game isn’t actually based on the movie (there’s no associated license), and it definitely defines itself uniquely enough so that it doesn’t feel like a carbon copy of the film.

One thing that you’re going to love in Gladiator is the potential to win a huge score right on the reels. Gladiator features some of the biggest payline payouts of any Betsoft slot machine. Matching five of the coliseum symbols anywhere on the reels will earn you a massive 3,000 credits per coin wagered. But that’s not the only bank-breaking prize; either of the two gladiators is worth 2,000 credits if you can hit five of them on an active payline. Even without a progressive jackpot, these wins are big enough to feel like you’ve hit the lottery if you’re lucky enough to land one.

Our favorite Gladiator feature is definitely the Arena Battle game. If you manage to hit the hero, coliseum and villain symbols consecutively on the same row (on either the first three or middle three reels), you’ll instantly be taken into the arena to watch a battle between the hero and villain. Before the fight begins, you’ll have to pick a gladiator to back. Once you’ve chosen your side, you’ll watch the battle play out on screen, winning money every time your chosen warrior lands a blow or blocks an attack. If your gladiator knocks out his opponent, you’ll win an even larger reward! 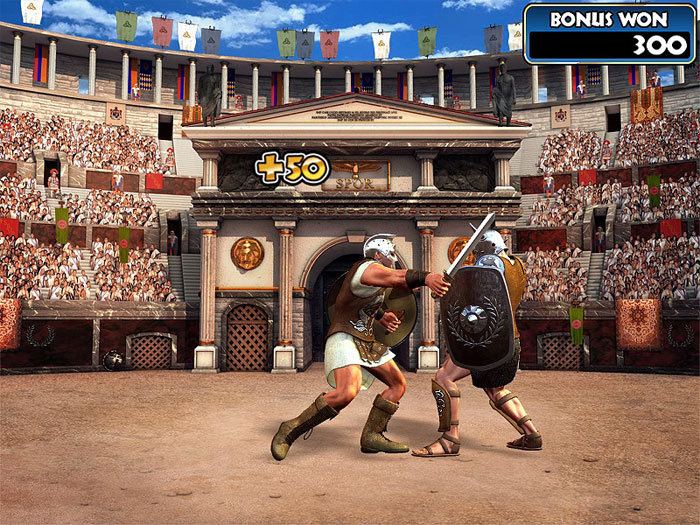