Usually, if someone were to tell you that being an exterminator was an easy and fun way to make some extra money, you’d call them crazy. As a job, it’s probably one of the most thankless and least enjoyable ones around. But there’s one case in which that statement would actually be true: Betsoft’s The Exterminator slot machine. With a humorous theme, great graphics, and plenty of large prizes, The Exterminator is probably the most fun you’ll ever have trying to disinfest a house! 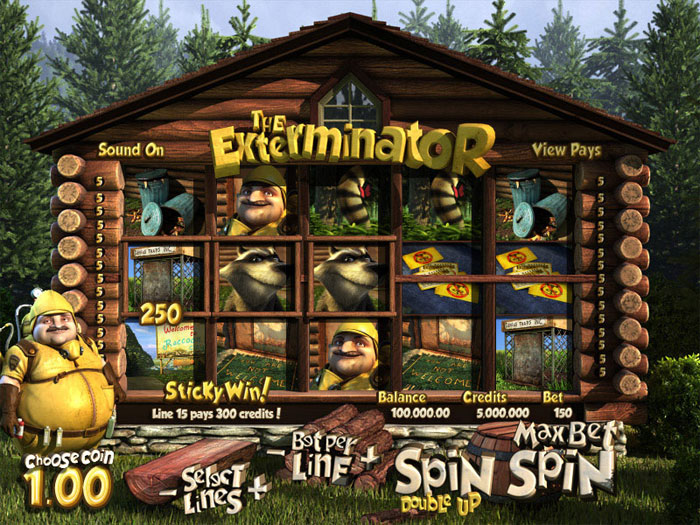 >>> Visit www.BetOnline.com to play 3D slots in the USA for real money <<<

General Info on The Exterminator

The Exterminator is a five-reel, 30-payline slot machine that’s a part of the Betsoft 3D slots lineup. The game features several different denominations of coins (the exact coin sizes will depend on the currency you use), and the game does allow players to wager between one and five coins per line, which is a good way of allowing for bets of many different sizes.

If you’re familiar with slots in general, you know the basic idea of what you’ll be trying to do. On each spin of the reels, the object is to match identical symbols in order to win prizes. You’ll need to match three or more of the raccoon, the exterminator, or six other symbols in order to be awarded a prize. All wins occur from left to right beginning on the first reel, and the more symbols you match together, the larger your wins will be.

Where The Exterminator really stands out from the crowd is with its bevy of special features. Perhaps the most notable feature is the one that’s built right into the game itself: the Sticky Win feature. After every single winning spin, you’ll see your winning symbols locked into place. Instead of simply awarding you a win right there, the slot machine reels will come to life again, with the rest of the symbol respinning. Make some more winning combinations through this process, and they’ll be locked too, allowing for yet another respin.

This process will continue until every single symbol is locked into place, or you finish a respin without making any more winning combinations. At that point, you’ll be awarded whatever the total of all of your winning lines is, along with any bonuses you might have accumulated along the way. This feature makes it very easy to score multiple wins on a single spin, and you’ll regularly see multiple respins after winning spins.

There are a couple of other features worth mentioning, too. If you hit a truck symbol on any reel, it will turn into an expanding wild that covers the entire reel once your respins have been completed. There’s also a free spins game that’s activated any time you receive five or more footprint symbols on the screen. These free spins come with random multipliers of as much as 5x. There’s also a second screen bonus round that we’ll talk about more a little later.

The Exterminator Theme and Presentation

Even though Betsoft is known for the strength of their presentations, The Exterminator still stands above the crowd as one of their better efforts in a long time. The graphics aren’t especially amazing, but they do a great job of fitting the theme. In fact, everything about the game keeps the theme strong and consistent, from the forest landscape the game takes place in to the natural sounds and the lighthearted music that plays throughout the game.

The graphical touches all work to help support the theme as well. For example, all of the animations feature interactions between the exterminator and the raccoon, which definitely helps to set the theme. Plus, not only are all of the game’s symbols right on theme, but they also use the kinds of color schemes that lend seamlessly into the environment, which creates a very attractive visual feel.

Top Payouts on The Exterminator

In The Exterminator, it’s all about finding…well, the exterminator, of course. Yes, his target, the raccoon, will also return a pretty decent return, it’s Alvin himself that fetches the real prizes. If you’ve wagered the maximum five coins per line, hitting five of Alvin on the same payline will return you 2,500 credits – definitely a good payday for any extermination job. With the sticky win feature, hitting five of the same symbol is easier than ever, making this and other big prizes more common than you might expect.

Favorite Features in The Exterminator

Our favorite feature in The Exterminator is the second screen bonus round. This game is triggered anytime you manage to hit five or more blueprint symbols anywhere on the reels. When this occurs, you’ll find yourself transported right outside the home that the game takes place in. The exterminator himself is searching for the raccoon, and has narrowed down its possible location to one of a handful of possible hiding places.

It’s your job to pick one of these spots for the exterminator to investigate. Once you’ve done so, you’ll get to watch an animated sequence as he checks it out. After this is finished, you’ll receive an instant bonus prize that can be worth as much as thousands of credits!