Everyone loves a good fairy tale, especially one that’s filled with colorful characters and fantastic settings. That’s the idea behind Enchanted, a 3D slot machine designed by Betsoft. This game is a ton of fun to play, and will remind you of the fairy tales and legends that used to entertain you when you were just a child.

But that’s not the real draw to this game. What should really get you excited is that Enchanted has some payouts that are unparalleled in other 3D slot machines, offering you as much as thousands of credits just for matching five of the same symbols. That’s the kind of money that can help you write a fairy tale of your own – one that will definitely have a happy ending. 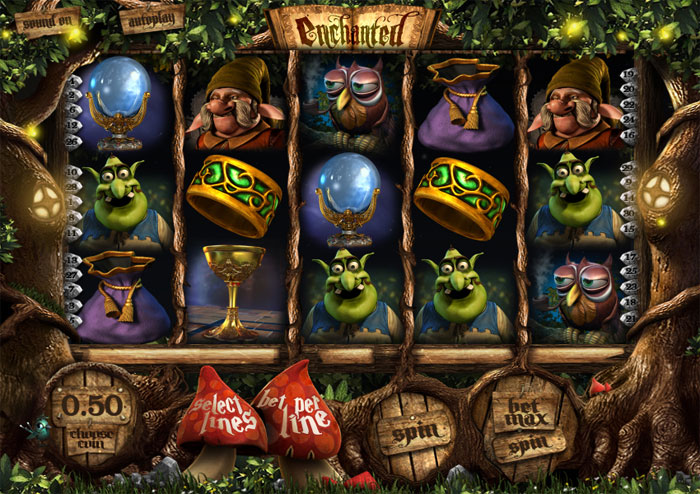 Enchanted is a 3D slot machine from Betsoft, and features a five-reel layout with up to 30 paylines. Players have the option of wagering anywhere between one and five coins (which can be any of a number of different denominations) per line, allowing plenty of control over how much money you can spend per spin.

In order to win, you’ll need to match symbols across your active paylines. Only matches that consecutively run from left to right will win you prizes. There are nine standard symbols that you can match in order to trigger wins; most of these symbols require three of a kind to trigger a win, while the four fairy tale characters that start in the game will trigger small wins even if you match just two of them.

There are also three special symbols (as well as one combination of standard symbols) that can trigger bonus rounds or other special features. First is the crazy hat symbol; if you hit two of these anywhere on the reels, you’ll trigger the Crazy Reels feature. This feature turns the crazy hat symbols into wilds, which will often immediately trigger bonus winnings. After the initial wins, up to three reels will be re-spun, putting new combinations of symbols into place and potentially earning you even more cash.

Next up is the Spellbook Free Spins game, which is triggered if you hit three or more spellbook symbols on the same payline. This game is a fairly simple free spins game, with the exception that a special Enchanted symbol will be added to the third reel. If this symbol lands in the center of that reel during one of your free spins, you’ll earn even more bonus spins or other rewards.

Putting together a combination of the Feera and Rufus symbols next to each other on any active payline triggers the Save Feera’s Birdie Bonus Round. In this game, you’ll take control of Feera as she tries to punish Rufus for stealing her bird. You’ll have to move her around the screen and attack Rufus three times, after which he’ll be turned into a frog. After the game ends, you’ll be awarded with instant bonus credits.

Theme and Presentation in Enchanted

The fairy tale theme of Enchanted is easy to spot from the moment you begin playing. The graphics, sounds and voices are all soft and fantasy-themed, drawing you into a game that could have come from a child’s storybook – if it weren’t for all the gambling. The bonus rounds in Enchanted all feature pretty animations and classic fantasy tropes, like fairies casting spells and elves living inside of trees. There’s hardly an aspect of classic children’s fantasy that doesn’t make an appearance somewhere in Enchanted.

One place where Enchanted really stands out from the other games in the Betsoft lineup is in the massive wins that are possible on the reels if you can hit just the right combination of symbols. While most Betsoft games have top symbol prizes that top out at around 300 or 500 credits per coin wagered, Enchanted blows that away if you can hit any of the four main characters from the game.

It all starts with Tonk the Elf, who is worth 1,000 credits if you are able to fill up a whole payline with him. Things only get better with the ogre Rufus, who can make you up to 2,000 credits, or Feera the Fairy, who is worth 3,000 credits. But the biggest prize of all is reserved for Elrid the Wizard. If you manage to connect to five of him on the same payline, you’ll earn a massive 5,000 credits per coin wagered!

The feature we had the most fun with in Enchanted was the Tonk’s Tinkering Doors game. This unique bonus feature is one that requires you to accumulate three golden keys along the fifth and final payline. You don’t have to get them all at once; instead, the game will keep track of how many keys you’ve collected so far, which will keep you striving to hit that third key. When you do, you’ll be treated to a game in which Tonk tries to repair the reels. You’ll get to choose three different locks to open with your keys, opening instant prizes that can total in the thousands of credits. 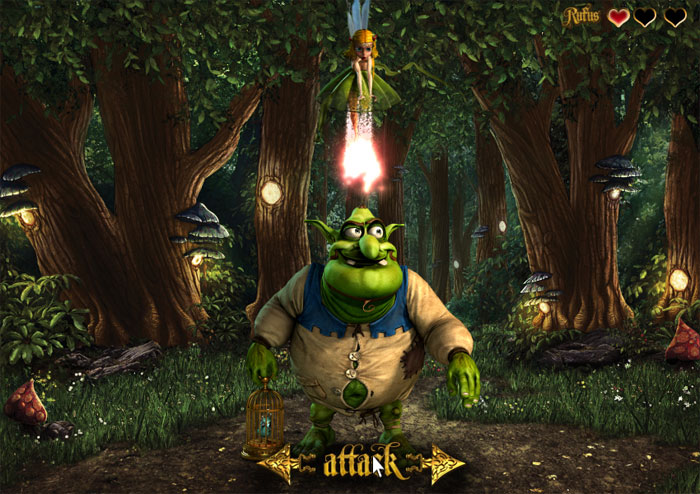