Miles Bellhouse and his Curious Machine is the latest in the 3D slots line of games from Betsoft. The Curious Machine features a cast of characters that include a young inventor, his robot companion, and a general who wants nothing more than to get his hands on the machine. With a fantastic time travel theme and plenty of entertaining bonus rounds, this is a game that should appeal to any fun-loving slots fans. 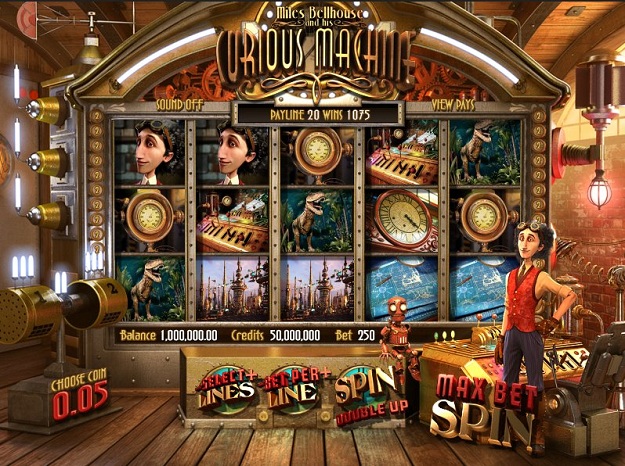 >>> Visit www.MrGreen.com now to play The Curious Machine for money <<<

The Curious Machine is a five-reel, 30-line slot machine that features the rich graphics, sounds and animations you’ve come to expect from Betsoft games. There are a wide range of customization options for players to pick from: they can play anywhere from one to 30 lines, and bet up to five coins on each line. The game also features several different coin denominations so that players of all budgets can enjoy playing.

As in most slot machines, you’ll need to match three or more of the same symbol from left-to-right in order to score a win. There are seven different symbols to match, ranging from lowly symbols like blueprints to the game’s main characters, all of which offer large prizes. There’s also a vortex symbol that acts as this game’s wild, substituting for any other symbols in order to make winning combinations. This vortex is also part of one of the game’s coolest features, which we’ll talk about later on.

The biggest attraction in the Curious Machine is the sheer number of special features available on this slot. If you enjoy bonus rounds, this is definitely the game for you! Here’s a quick list of the many different features you’ll encounter while playing:

• Reel Rewind Second Chance: If you finish a spin without winning any prizes, you’ll sometimes be rewarded with a random second chance. When this happens, you’ll see one of the reels respin, placing new symbols on the board and potentially winning you prizes with newly formed combinations. On this machine, it pays to play big, as this feature is only available when you play all 30 paylines.

• Blast to the Past: This exciting free spins feature is triggered whenever you manage to hit three dinosaur symbols anywhere on the reels. When this happens, you’ll be rewarded with a number of free spins, each of which comes with a multiplier that could potentially give you up to five times your normal winnings on that spin. The multiplier changes after every spin, meaning any spin could surprise you with a jackpot-level prize!

• Travel Through Time: If you hit three bonus symbols anywhere on the reels, you’ll activate the Travel Through Time feature. This second screen bonus game sets you on an adventure where Miles and Gizmo try to elude General Traytor before he can get his hands on the machine. At the end of this little animated sequence, you’ll be rewarded with a large prize of bonus credits.

• Double Up: This thematic take on the classic gamble game is an optional bonus round that can be played after any spin. If you choose to play it, you’ll watch as Gizmo hides a coin in one of his two hands. Pick the right hand, and your winnings on that spin are doubled, but guess wrong, and you’ll leave with nothing.

The Curious Machine is one half steampunk, one half time travel – a combination that might be reminiscent of the classic story “The Time Machine.” But this is definitely an original creation, especially with the very playful tone the entire game takes. There’s a story to the game of a devious general who wants to steal the machine, but mostly, the game is all about the fun and excitement of traveling through time. With bright colors, cheerful music and a very cute robot sidekick, this is definitely a game with a theme and presentation that will make you smile.

Top Payouts in The Curious Machine

The biggest prize available on the reels in this machine comes when you hit five of Miles Bellhouse himself in a row on a single line. This combination is worth 500 credits for every coin wagered on that line – up to 2,500 credits in all. Other large prizes belong to the game’s other characters – Gizmo and General Traytor – who can award up to 300 and 200 credits respectively.

Favorite Features in The Curious Machine

It may not be the feature that awards the biggest prizes, but perhaps the most thematic feature in the Curious Machine is The Vortex. While this symbol normally acts as a regular wild, it takes on a second purpose if you should happen to hit one and still not score a win. When this happens, all of the symbols surrounding the vortex symbol begin to swirl around the vortex before landing in all-new positions. This has the potential of changing things to your advantage; any winning combinations created this way will now pay out as normal. It’s definitely a unique feature, and given how well it ties into the time travel theme (at least if you’ve seen Doctor Who!), it deserved a special mention.