Have you ever dreamed about owning your own oil company? It might be a messy job, but it’s definitely one that can bring in a lot of money for you in a hurry. That’s the concept behind Black Gold, a new slot machine game by Betsoft that features simple gameplay and fun special features. If you’ve been looking for a way to tap into the money-making potential of oil without buying your own well, Black Gold will give you a chance to win some amazing prizes with a single click of your mouse.

Black Gold is a 30-line, five-reel slot machine that can be found in most Betsoft-powered casinos. The game is a part of Betsoft’s 3D slot machine line, which means it is filled with their signature style of animations and graphical touches that you wont’ find anywhere else. Players have the option to bet up to five coins on each line, with a variety of different coin denominations available for players to choose from.

The object of the game is to match identical symbols, ranging from barrels and pipes to horses and the oil tycoon himself. In all cases, winning combinations can only be made from left to right across the reels, and you’ll need at least three consecutive symbols in order to trigger a win.

There’s definitely no shortage of special features in this game. Right off the bat, you’ll notice one of the major special aspects to Black Gold on the main screen, as there’s a Payout Multiplier Bar in the upper-right corner. Each time you make a winning combination during the game, you’ll see the payout multiplier move up one notch. Then, you’ll be treated to a free respin of the center reel on the machine. If you make a new winning combination, you’ll now win a prize increased by the new multiplier. Then, the multiplier will move up once again, and the process will repeat itself. This continues until you’re unable to make a winning combination, at which point the multiplier drops back down to 1x, and you’ll have to start again with a new spin.

Of course, Black Gold also has a number of more traditional special features as well. If you manage to receive three or more barn symbols anywhere on the machine during a single spin, you’ll be transported into the Nighttime Free Spins Mode. In this game, all of your free spins will also feature a barn symbol that now acts as a wild, helping to complete any normal winning combinations. In addition, the barn will also act as a multiplier that increases each time you use it to make a winning combination, up to a maximum of 10x.

A simpler game is the Drilling for Oil Click Me feature. This game starts any time you hit three or more drill symbols anywhere on the reels. When this happens, you’ll be prompted to click your choice of any of the drill symbols. Once you’ve made your choice, you’ll reveal a prize of instant credits that will automatically be added to your winnings: a very quick and easy game that can also be very valuable for your bankroll.

One of the most entertaining special features in Black gold is the Higher or Lower bonus round. In this game, you’ll be presented with a number on the side of an oil well. Your job is simply to guess if the next number shown will be higher or lower than the one currently displayed. Guess right (or wrong) four times, and the game will be over. In the end, you’ll be given a prize of bonus credits based on the amount you spent on the spin that triggered the game, as well as the number of hits you had during the game itself. 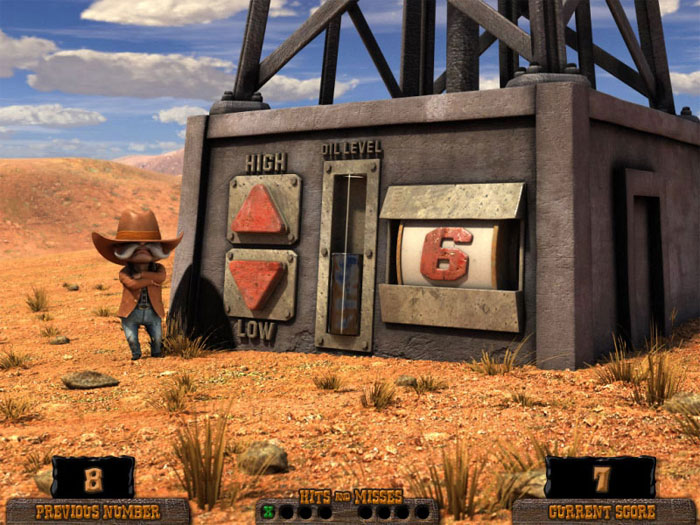 The symbol you’ll want to shoot for during most spins is the oil tycoon himself. Spot him and his big hat on the same payline five times in a row, and you’ll win 400 credits for each coin that you’ve wagered. That’s up to 2,000 coins should you be wagering the full five coins on each line. Of course, the multiplier bar can make the prize even larger; hit the big combination on a spin when the bar is as high as 5x, and you’re up to 10,000 credits just for hitting five in a row! With no progressive jackpot in the game, this is definitely the most likely way to win an enormous prize while you’re playing Black Gold.

Theme and Presentation in Black Gold

Black Gold does a great job of really pushing their “Texas Tea” oil theme. The game uses a mix of oil-based and Texan motifs, from lots of oil barrels and derricks to horses, trespassing signs and rich oil barons. Like other Betsoft games, Black Gold does not disappoint when it comes to how these different themes are presented, either; the graphics are all among the best in the industry, and while there aren’t many animations, those that are used are fun and add to the game’s look and feel. The light-hearted music helps make the game fun to play and keeps the tone from getting too serious, rounding out the game nicely.