Are you ready to sail the seven seas? In Barbary Coast, you’ll play the role of a pirate who is out for adventure, treasure and women. Bonus rounds allow you to experience other aspects of pirate life, like drinking (you have to do something on those long voyages) and sword fighting on the ship’s deck.

Taking big risks and gaining even bigger rewards is what being a pirate is all about, but it’s also exactly what any slots player does every time they spin the reels. Whether you want to pretend to be a pirate for a few hours (and who doesn’t?), or you’re just interested in finding a hidden treasure of your own somewhere on the reels, Barbary Coast is an excellent way for any swashbuckler to find some booty of their own to plunder. 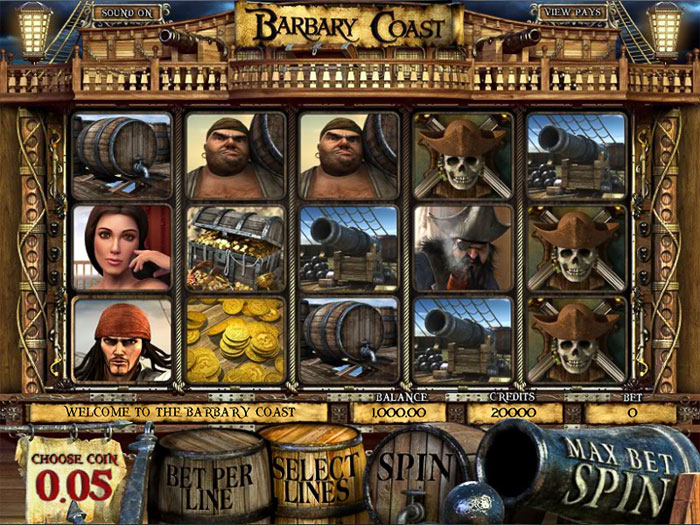 Barbary Coast is a five-reel, 30-line slot machine that’s one of the many games in the Betsoft 3D slots collection. Players have the option of playing as few as one and as many as five coins per line, with several different coin denominations available to choose from. The object of the game is to match symbols across your active paylines, with only combinations running from left to right across the reels counting as wins.

There are nine different standard symbols that can be matched up to win prizes instantly. These range from kegs of ale and cannons at the lower end, up to a beautiful maiden who serves as the most valuable symbol of all. In order to score a winning combination, you’ll need to match at least three of the same symbol.

In addition to the regular symbols, there are several special symbols that trigger special features or other rewards. For instance, hitting three or more parrot symbols anywhere on the reels will trigger a free bonus spins round. Similarly, hitting three or more Ben Sawyer symbols on the same active payline will active a click me game; you’ll have to choose one of the symbols, revealing an instant bonus of hundreds of credits behind him.

Next up is the cannon symbol. This symbol only appears on the center reel, but when it does appear, the results are explosive: the entire center reel is turned wild, significantly increasing your chances of winning on that spin. The wild reel will also hold over for your next spin, allowing you a second chance to take full advantage of it.

Another fun game is the Grog Challenge, which is triggered when you hit three or more of the pirate worker symbol on the same payline. In this bonus round, you’ll have a drinking contest against one of the ship’s pirates. The better you do, the more bonus credits you’ll be walking away with after it’s over!

Finally, the Captain Blackbeard symbol allows you to get into the second screen Fight Bonus Round, which we’ll discuss in more detail below.

Theme and Presentation in Barbary Coast

Barbary Coast sets the player on a high seas adventure. The game takes place on a pirate ship, and most of the visual motifs feel like they’re lifted almost directly from a Pirates of the Caribbean film. The opening voiceover sets the stage for a world of pirates, ships and treasure. Each of the animations and bonus features pushes the pirate theme to the max, especially the second screen bonus that plays out as a classic sword fight. The music compliments the game well, featuring a high tempo, rousing theme that will have you ready to jump up into the crow’s nest and raise the pirate flag.

If you want to win as much money as possible during one spin in Barbary Coast, you’re going to want to hope to mind the maiden symbols. This lucky lady can earn you up to 300 credits if you manage to hit five of her on a single payline. There are lots of other solid payouts, though, including 250 credits for five skulls or five treasure chests, and 225 credits if you cover a full payline with gold coins.

Barbary Coast has one of the best special features of any slot machine on the market today. If you hit three or more Captain Blackbeard symbols on one of your active paylines, you’ll trigger the Second Screen Fight Bonus, in which you’ll help Ben Sawyer battle Captain Blackbeard in an attempt to save a sultry maiden.

When the game begins, you’ll have to pick three actions for Ben to take during the battle. Then, you’ll watch as he fights the Captain using your predetermined thrusts and parries. The better Ben does, the more cash you’ll win, with a special bonus being awarded for knocking out the other pirate! 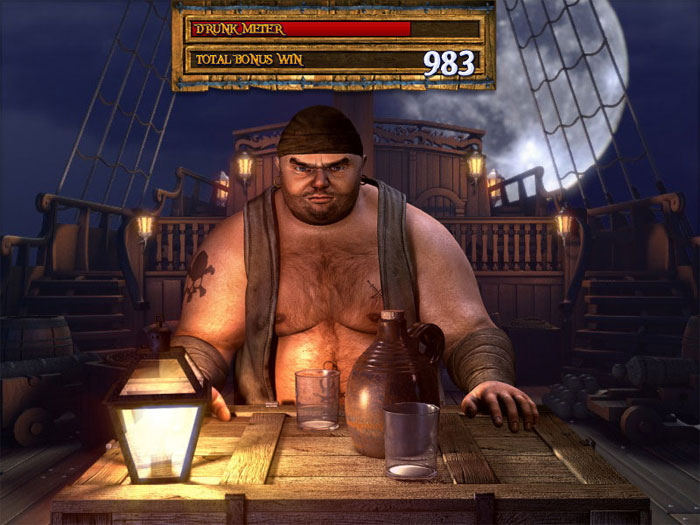