In the real world, we’re still a long way off from flying to other planets and battling alien spaceships, but the idea is definitely a popular one in movies and television. In fact, just about everyone is familiar with the idea of the “little green man.” And while we might not have any idea whether aliens are rich or not, they can certainly make you a healthy amount of money in the Arrival slot machine. In this game, you’ll play the role of a space marine who encounters aliens, protects Earth, and sometimes even has to board alien ships in order to rescue his friends.

Arrival has a fun, lighthearted theme and a lot of entertaining special features that make it a joy to play even when you’re not winning. But considering the number of different ways there are to score prizes during play, you’ll probably enjoy the games payouts just as much as its goofy premise. 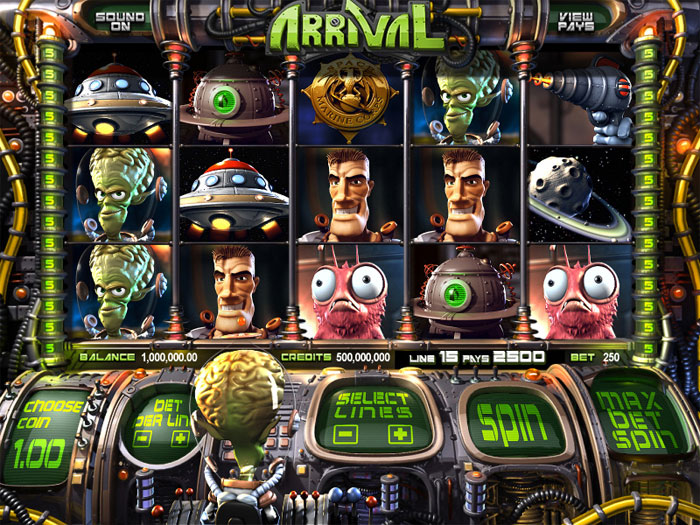 Arrival is a 30-line, five reel slot machine that has three rows of symbols on the screen at any given time. As in most of the Betsoft 3D Slots games we’ve reviewed, players can choose to play anywhere between one and five coins per line, with winnings being multiplied accordingly.

In this game, you’ll be matching space-themed symbols across your active paylines in order to win prizes. Basic symbols that can be used to win prizes on the reels include targeting computers, badges, spaceships and the space marine himself. Wins can only be triggered when your symbols are matched from left to right. The more symbols you match, the more you’ll win, and with 30 different lines of play, it’s definitely possible to win multiple times on the same spin.

In addition, there are a number of special symbols that can be used to trigger bonus rounds or other special features. For instance, hitting three ray guns anywhere the screen during a spin will trigger a “click me” feature. You’ll be prompted to choose between various flying saucers, each of which has an instant credit prize hidden behind it.

Another bonus to watch out for is the wild reel feature. This game is triggered by hitting three or more Green Alien symbols anywhere on the screen. When this occurs, you’ll be awarded a number of free spins. However, to make those spins more lucrative, the UFO will fire away to make one of your reels entirely wild for the duration of the free spins, greatly increasing your chances of winning on each game.

Theme and Presentation in Arrival

The Arrival slot machine is all about aliens and science fiction stories, so you can expect to find many popular tropes from that genre here. That goes for everything from the game’s setting – inside an alien spacecraft – to the bonus rounds, where you do things like attempt to stage a rescue for a female marine who is being held hostage by the villainous little green man. The graphics and sounds are all designed to accent this theme: the alien fiddles with his ship’s controls before every spin, you’ll hear the sounds of the engines and other devices firing up, and the music is straight out of a space battle from any cheesy sci-fi film. You’ve even endure taunts from the alien himself while you play. 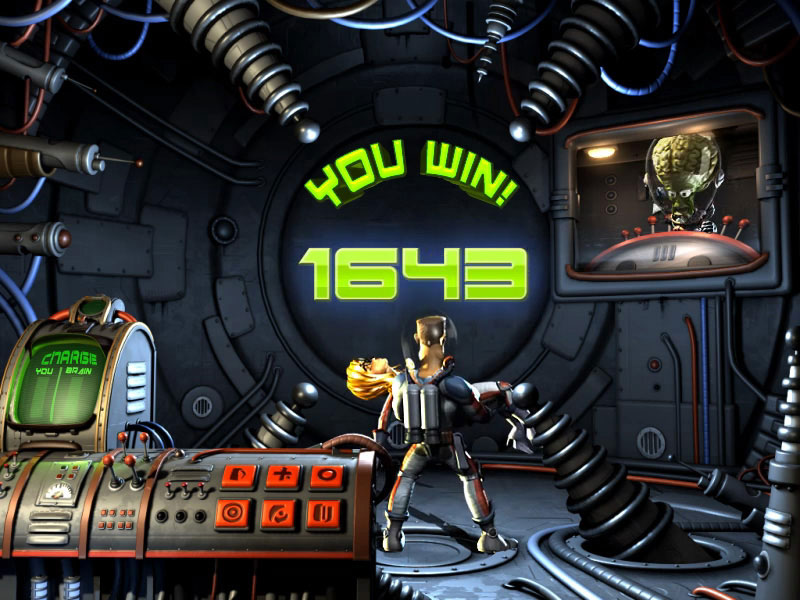 The biggest payouts in the game mostly come in the game’s bonus rounds, and there are no progressive jackpots to win – but there are some fairly big wins to be scored on the reels. The best prize available here comes from the heroic space marine. Five marines in a row are worth 400 credits per coin wagered, while four in a row will net you 200 per coin. Another very generous prize comes if you match five of the little red alien; that combination is worth 300 credits.

Our favorite feature in Arrival is definitely the Marine Rescue Bonus Round. In order to enter this game, you’ll need to hit three or more Female Marine symbols. This will trigger a second screen feature where you’ll take control of the space marine, looking to save his female partner who has been abducted by the little green alien. You’ll have to guide our hero through the process of saving his partner. Once you’ve completed the rescue, you’ll be rewarded with a large prize of bonus credits. This game is a welcome way to break up the regular gameplay, not to mention a very lucrative bonus that awards some of the largest prizes available in all of Arrival!