Paris is known as the City of Lights – a place of history, culture and romance, as well as one of the world’s greatest cities. But A Night in Paris isn’t really about that aspect of the city. Instead, it tells the tale of an art thief who is looking to steal away some of the most valuable painting and statues housed in Parisian museums, along with the policeman who is trying to stop him.

A Night in Paris is a rewarding and entertaining slot machine that features a number of exciting bonus games. If you’ve always dreamed of going to Paris but never had the chance, this game might just provide you with the big win you need to get there – or at least give you a little taste of France while you have fun playing.

Play A Night in Paris For Free 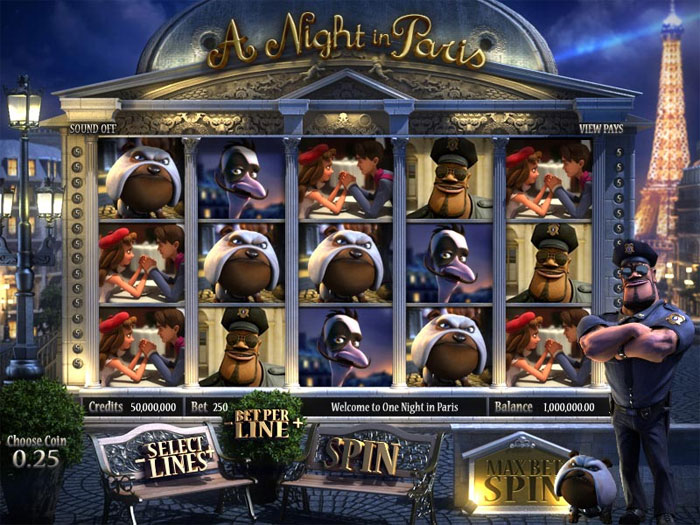 General Information about A Night in Paris

A Night in Paris is a five-reel, 30-line 3D slot game with all of the standard features found in Betsoft Gaming’s 3D slots collection. Players can choose to wager between one and five coins per line, with payouts being multiplied accordingly. The object of the game is to match identical symbols, with matches running from left to right consecutively earning prizes. In most cases, it takes at least three in a row to trigger a prize, though some of the most valuable symbols do give small prizes for matching just two.

The symbols in this slot range from French standbys to some of the characters that populate the game. These include the Eiffel Tower, a croissant, a young couple enjoying a romantic meal, and both the policeman and the art thief.

There are several bonus games available, each of which is triggered by a different combination of symbols. Two of these special features revolve around the police badge symbol. Should you land a badge between the art thief and the policeman anywhere on the reels, you’ll trigger an instant win of some bonus credits. If you instead manage to hit three or more badges, you’ll earn some free spins that take place while the policeman and his dog try to track down the elusive art thief in a chase sequence that takes place on screen while the reels spin. There’s also a painting symbol that can trigger a second screen bonus.

Theme and Presentation in A Night in Paris

Let’s deal with the obvious right away: A Night in Paris takes place in Paris. At night. Okay, so that much goes without saying, but there’s a lot more to the game’s presentation than that. The scenery used during the game’s main screen isn’t strictly Parisian, but it does work; it has the feel of an outdoor cafe, which is certainly something you could find in Paris. The music is best described as “stereotypical French music,” but it works for the game, which is definitely lighthearted as a whole despite the crime theme.

Since the Parisian angle is downplayed slightly, the focus of the bonus rounds and much of the animation is on the art theft. Most of the slot’s special features use interactions between the police and the thief, and both the officer and his dog are a constant presence on the screen.

Regardless of which part of the game’s theme interests you more, the game’s graphics are top notch. The backgrounds and icons are crisp and clean, while the animated characters are very lively. These elements work together well to draw you into the game while you play, making A Night in Paris much more fun to play.

Top Payouts on A Night in Paris

While there are a lot of large payouts that can be found on the reels of A Night in Paris, a couple stand above the rest of the pack as particularly big wins. The largest prize of all can be won by matching five policemen on a single active payline. This combination is worth a cool 500 credits per coin wagered. Nearly as valuable is the art thief; five of him will earn you 400 credits.

Favorite Features in A Night in Paris

The best online slots bonus round in A Night in Paris is the Caught in the Museum bonus round. If you hit three painting symbols on the same spin, you’ll be taken to a second screen game in which the thief will attempt to rob a museum. However, the police are hot on the trail, and it’s only a matter of time before he gets caught. During this game, you’ll watch as the thief attempts to evade the police, with the game ending when he is finally apprehended. Once the game ends, you’ll be rewarded with a large prize that can be worth more than 1,000 credits!