The Stone Age probably isn’t the first thing that comes to your mind when you think about places where you might strike it rich, but 2 Million B.C. might just change that. There are lots of ways to earn some big rewards in this game, both on the reels and through the several different bonus rounds that are hidden within the game.

While it’s not the flashiest of the Betsoft slots, 2 Million B.C. is a fun machine that’s well worth trying out. It’s particularly good for players who are more interested in solid gameplay and a friendly atmosphere than complex bonus feature or chasing progressive jackpots. 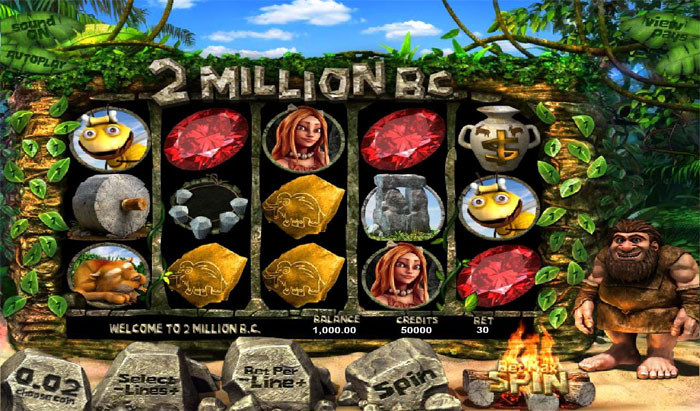 2 Million B.C. is a five-reel, 30-line slot from Betsoft Gaming and is part of their Slots3 series. Players have the option of playing between one and five coins on each line, with available coin denominations ranging from $0.02 to $1. This means players can bet up to $150 on a single spin if they wish to do so.

As in most online 3D slot games, the object is to consecutively match like symbols across active paylines, with only combinations going left-to-right counting as wins. The symbols are all based around the idea of a prehistoric caveman society, and range from jewels and cave paintings to wheels, tigers, and cavewomen. In most cases, matching just two symbols is enough to win at least a small prize, though some of the lower value symbols do require three-of-a-kind in order to win.

In addition, there are a few special symbols that can be used to trigger the game’s special features. For instance, hitting three or more fire symbols will start a free spins bonus game that can be triggered for potentially endless free spins. Meanwhile, three acorn symbols will start the Saber Attacks game, in which you’ll help a caveman fire shots at a Sabertooth to win some instant bonus credits. There’s also a Diamond Bonus Game that we’ll talk about more below.

Theme and Presentation in 2 Million B.C.

As the title would suggest, 2 Million B.C. utilizes a caveman theme. This is one of the older Betsoft 3D slots, so you won’t find the same kinds of extensive animations or voice work that’s present in newer releases like The Slotfather. However, there’s plenty of charm in the way the game is presented. The main game screen takes place in a wilderness setting, complete with stone tablets and a small fire.

The little touches are what really make this game’s presentation work. There’s always a roaring fire on screen, as well as a caveman who moves and interacts with the other graphical elements. When you trigger the free spins game, you’ll send the game into a “night mode,” after which the caveman will go to sleep. Even the sounds, while minimalist, work perfectly; the music is both light and primitive, you’ll hear the noise of the jungle in the background, and even the caveman will give a bored yawn if you’re taking too long to make a decision.

The biggest payout available on the reels in 2 Million B.C. comes from hitting five cavewomen on the same active payline. This combination pays 500 credits per coin wagered, or up to $2,500 if you’re playing for the full number of coins at the highest denomination available. Other large payouts include the 400 credits you’ll receive for matching five saber tooth tigers, or the 300 credits you’ll get if you match five flying bugs or four cavewomen. While there is no progressive jackpot offered here, the large payouts should be enough to satisfy all but the most avid jackpot hunters.

Our favorite slots bonus game in 2 Million B.C. is the Diamond Bonus. Along with earning you some major prizes when you hit three or more diamonds on the reels (up to a maximum of 200 credits for five diamonds), you’ll also get to play a second screen bonus game that sees the caveman trying to steal a diamond from a saber tooth tiger. You’ll be able to choose between several different methods of attempting to take the diamond, after which you’ll see the results. The better your caveman does, the bigger the reward for you!