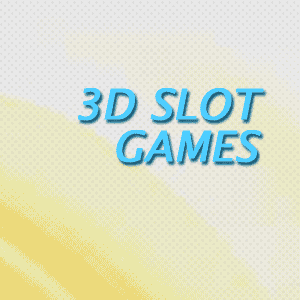 One of the most advanced slots lines in the industry, 3D slots games are an exciting new type of slot machine that adds stunning graphics, awesome music and sound, and animated scenes to create games that are not only fun because of the big prizes you can win, but also because of the incredible presentation factors imbedded into the game. At least two different casino companies now offer 3D slots, and it’s likely that more companies will be following in their footsteps soon. Keep reading to learn more about the world of 3D slots!

Bovada Casino (www.Bovada.lv) have just began offering 3D slot machines and they already have over 30 of the latest games from Betsoft Gaming available for you to play. Bovada is currently the best online casino for USA players, and you can enjoy their 3D slots in instant play mode without downloading the games!

What is a 3D Slots game?

A 3D slot machine is any slot that uses graphics or other features to create a 3D experience in the game. The most popular line of 3D slots is produced by Betsoft, which pioneered the genre. Today, there are over 20 different 3D slots games offered at Betsoft casinos.

These games do not require players to use special glasses or other devices in order to use the 3D effects. Instead, the Betsoft games are notable because of the 3D animations that are used throughout the games. Sometimes, these are short little flourishes that happen after you win a prize, or incidental animations of characters or objects moving around the screen during play. At other times, there are long animated sequences that introduce the games or are a part of bonus rounds.

A much different brand of 3D slots is offered at Microgaming casinos. Microgaming was the creator of Sterling Silver, a true 3D slot machine that’s designed to be just like the 3D movies and comics that have been produced for decades. The slot machine itself is simple, but trying to look at the game without 3D glasses (any of the older style red/blue glasses will do) is likely to give you a headache. On the other hand, looking at the game with the glasses on is a real trip, as the slot machine’s symbols, instructions and graphics all pop off the screen in order to create a true 3D effect that’s unlike anything ever seen before in online slots.

While the “3D” in the name of the Betsoft 3D slots line definitely refers to the state-of-the-art graphics provided in the games, these machines actually have a lot more similarities throughout the series than just the graphical improvements. All of these games feature extensive bonus rounds as well.

These bonus rounds fully utilize the 3D graphics in order to better incorporate the themes of each game. Since the graphics and animations are so advanced, it makes it much easier on the game designers to produce engaging special features that add a lot of fun to playing the games. It’s one thing to have a game like Heist that’s about robbing a bank, but the 3D graphics allow players to actually participate in the crime itself, wining prizes along the way. Having fun pirate-themed symbols may be enough for some games, but Barbary Coast uses the 3D animations to allow players to choreograph an entire swordfight between two pirates on the high seas. It’s touches like these that really sets the Betsoft 3D games apart from the competition.

You’ll also notice that the Betsoft line of games uses much higher quality sounds and music than most other slot machines. Many of the games feature songs with lyrics, and most of them feature a voiceover introducing the game when you first load the slot machine. In some of the newer games, there’s even a fair amount of voice acting done in order to make the games even more cinematic.

Where Can I Play 3D Slots Games?

3D slots games are available at a number of casinos. First, casinos running the Betsoft Gaming software have the full selection of their 3D slots, including such extremely popular machines such as The Slotfather and Mr. Vegas. In total, there are around 20 3D slots games offered by the company, with more being released on a regular basis.

While Betsoft is a newer software company that is only used at a select few online casinos, Microgaming is one of the largest online gaming companies in the industry, and supplies software to some of the biggest online casinos in the world. Microgaming doesn’t have a ton of different 3D games, but as we mentioned earlier, they are the only company offering a more traditional 3D experience through their Sterling Silver game. If you want to try a game that has full 3D effects, Sterling Silver 3D is available at most Microgaming-power casinos.