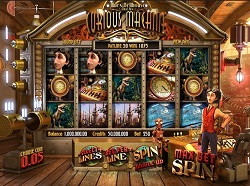 For such a popular story genre, it’s surprising that there haven’t been very many time travel-based slot machines. It’s the kind of theme that lends itself to all sorts of symbols, and you can have all sorts of bonus rounds that revolve around the idea of manipulating time. Betsoft apparently realized this, as they’ve just released a new game called Miles Bellhouse and his Curious Machine – a time travel game that is the latest machine in their 3D slots line.

In The Curious Machine slot, you’ll watch as Miles Bellhouse tries to protect his creation from the curious General Traytor, who wants to use the machine as a military weapon. The game is a 30-payline, five-reel game that features seven different symbols that can instantly win your prizes. You’ll need to match three or more of the same symbol on the same payline in order to score a win, with the biggest prizes reserved for symbols representing the game’s three characters. His five of Miles on the same payline, and you’ll win 500 credits for every coin you wagered.

But the most impressive part of the Curious Machine is definitely the various special features and bonus games you’ll run into while playing. This game has one of the wider varieties of features you’ll find on any online slot, making it a joy to play again and again in the hopes of unlocking them all.

For instance, take the Travel Through Time bonus round. This game is the biggest money winner of all in the Curious Machine, and is triggered if you manage to hit three or more of the game’s bonus symbols on the same spin. This is a fully-animated second screen bonus round that sends you along with Miles and his steam-powered robot Gizmo as they attempt to escape capture by the general. At the end of the game, you’ll be awarded a large prize of bonus credits.

There are plenty of other features that are available right on the reels, too. For instance, you might enjoy playing around with the Vortex, a feature that literally revolves around the game’s wild symbol. Yes, the vortex works as a standard wild, but if you don’t win a prize, the vortex will then cause all of the symbols around it to rotate around the vortex before landing in new positions. This, of course, has the potential to create new winning combinations.

Several other bonuses round out the game’s features. A free spins game with random multipliers is available if you match three dinosaur symbols anywhere on the reels. If you bet the maximum of 30 paylines and don’t score a win, you can randomly trigger a respin feature that will set one of the reels in motion again, giving you a second chance at scoring a win. There’s even a gamble feature that gives you a shot at doubling your winnings after every spin, if you choose to play it.

With the excellent time travel backdrop and so many different ways to win, the Curious Machine should satisfy both slots fans and those who enjoy a good story at the same time. The Curious Machine can be found at most sites offering Betsoft slots .