BetOnline Casino (www.BetOnline.com) is a relatively new online casino that was built around the Betsoft software platform. Since this casino is fairly new, you won’t find the hundreds of games that are sometimes offered by older, more established casino brands. However, the games that are here are some of the highest-quality offerings you’ll find anywhere on the internet, especially when it comes to the 3D slots that BetOnline is famous for. These innovative games make BetOnline a must-see for any serious online casino player. 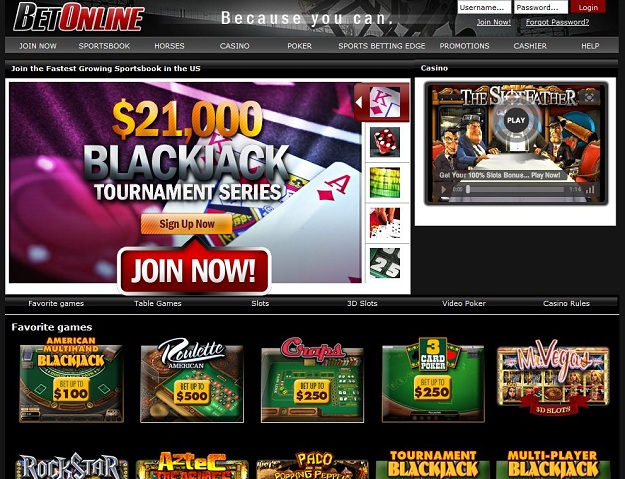 BetOnline is best known for their selection of slot machines. The total number of slots at BetOnline isn’t particularly impressive; there are about 40 different games available for play, which is a fairly low amount by the standards of online casinos. But this is a case of quality over quantity, as the BetOnline casino has some of the best slot machines in the entire industry.

The BetOnline slots are divided into two separate sections: a “slots” category that features standard slots that look similar to those that are common at other casinos. These games come in both three- and five-reel varieties, and feature a number of different themes and styles. The five-reel games are pretty typical video slots, with nine-line and 20-line games offering players multiple chances to win on each spin. By contrast, the three-reel slots are much simpler; a couple, like Lucky 7, are designed to replicate the classic action of single-line mechanical slots, while even the more complex games only feature five paylines and a relatively limited number of symbols and special features.

There are a couple of games that do bring something new to the table. For instance, the game Ghouls Gold is a three-reel slot in which players must play three paylines. When you first spin the reels, only the bottom line will spin, revealing three symbols. The player then has the option of holding as many or as few of these symbols as possible; for instance, if you’ve already made a winning combination, you can hold all three, or if you have two of the same symbol, you might hold just those two and hope to find the third symbol on the next spin. The held symbols then appear on all three paylines, after which the reels respin, landing new symbols on the reels that were not held over. This brings a feel similar to video poker games, which work the same way when playing multiple hands.

But the real innovation comes from the 3D slots collection. There are about 25 of these games at BetOnline, and they are much more polished than the “standard” slot machine games. Each of these games not only features 3D graphics and animations – where the slots collection gets its name from – but also many other cinematic features that make these games exceptionally fun to play.

For instance, one of the top 3D slots line is The Slotfather. This game takes a mafia theme and runs with it, using voice actors to create an entire gang of unique characters. With voiceovers, animated sequences and special features, The Slotfather is fun to play simply as a game, even disregarding the gambling aspects. Of course, winning a little money is still the goal, and the 3D slots typically give you many ways to win, from instant prizes and special features to second screen bonus rounds and progressive jackpots. These games are all five-reel games with 20 to 30 paylines, giving you plenty of control over how much you’d like to wager on each spin.

Other Games At BetOnline Casino

While slots are definitely the point of emphasis at BetOnline, there are plenty of other games that do a great job of rounding out the casino. When it comes to table games, BetOnline should have whatever game you’re looking for, regardless of what your favorite pastime is. If you’re a fan of blackjack, you’ll find eight different blackjack and 21 games, including variants like Spanish Blackjack and Blackjack Switch.

For roulette players, there are two different tables – one that features an American double-zero wheel, and the other having a single-zero European wheel. Craps players can take advantage of generous 3x odds behind the pass line. Other table games offered include baccarat, Let it Ride, Three Card Poker, Caribbean Stud Poker, Casino War, pai gow poker, and Red Dog.

BetOnline also offers players a large selection of video poker machines, ranging from classics to unique games that add new elements to spice up gameplay. Classic machines include all of the machines you’d expect to find at any casino, including Jacks or Better, Deuces Wild, Joker Poker and others. All of these games can be played in single-handed or multi-handed mode, with several machines having alternate versions that are built on different software platforms.

There’s also a selection of games known as “Pyramid Poker.” In these games, there are three different ways to win; along with rewards for the standard five-card hands, there are also three-card prizes that can be won on either the first three or last three cards in your hand, which makes optimal strategy far more complex than in standard video poker.

Finally, there are a handful of specialty games that give you additional ways to gamble at BetOnline. Along with a collection of keno games, there is also a selection of scratch cards known as Scratcherz, as well as a video bingo game.

BetOnline was one of the first online casinos to use the Betsoft casino software, making it one of the best Betsoft casinos. This software package features excellent graphic features on all games – as we mentioned, this is especially true for the 3D slots games – as well as smooth gameplay and good stability. This software comes only in an instant play, browser-based client; there is no downloadable client, nor is mobile gaming supported. Since everything takes place on the BetOnline website, the software also allows you to quickly move between the casino and BetOnline’s other gambling properties, such as their sportsbook and poker room.

BetOnline offers players a number of different ways to fund their online casino accounts. Both credit and debit cards are accepted, though currently, only cards with a Visa logo can be used to make deposits. Another option is using an e-wallet service; both Moneybookers and Neteller are supported, and both are great options for casual players and high rollers, as you can deposit anywhere from $10 to $50,000 using either method.

As with most online casinos, bank wires are also accepted at BetOnline. Players also have the option of mailing a traditional paper check to the casino’s offices, or mailing a money order through any number of services, including Western Union or Money Gram. There are additionally a couple of less common deposit methods that can be utilized here, including person-to-person transfers and a book-to-book transfer option that can be used if you already have an account at another sportsbook site that takes part in the Book to Book program.

Withdrawals can be made using most of the same methods used for depositing, with the exception of credit or debit cards. If you’d like to make a small withdrawal, you’ll want to use Neteller or Moneybookers, as these options have a $25 minimum; if you prefer having the money wired directly to your bank account or to receive a check, you’ll need to make a withdrawal of at least $500.

Players at BetOnline can contact customer support through several different methods. There’s a live chat function that’s available directly through the website; this is usually the most convenient way to solve any problems you’re having during the process of depositing or playing. If you’d prefer to speak to someone on the phone, there’s a toll free number that can be used in the United States and Canada, as well as another number that’s available to callers from around the world. An email address (cs@BetOnline.com) is also provided. One unique way of getting in touch with customer service is through Skype, where you can get help from the PlayerServices account.