Sushi isn’t necessarily for everyone: there are plenty of people who don’t find the idea of eating rice and seafood (often raw fish) all that appetizing. But for those who do love this Japanese delicacy, there’s nothing better than an authentic sushi bar. Anyone can put the appropriate ingredients together, but only a true sushi chef can get the taste, texture and presentation exactly right.

The latest Betsoft 3D slot machine, Sushi Bar, is all about the joys of eating at one – the atmosphere, the food, and the chef that prepares the food right in front of your eyes. This 25 payline, five-reel slot machine takes place in a graphical interface that sits right at the bar, and includes calming Japanese music that helps to set the mood of the game. Players can choose from five different coin sizes and may wager up to five coins on each line. 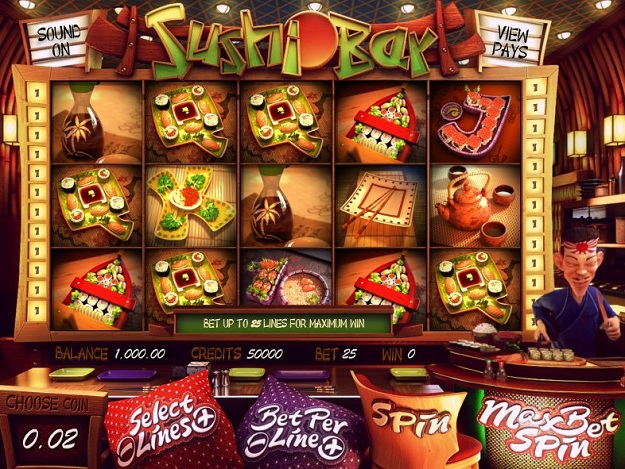 If you want to win prizes, you’ll need to match symbols from left to right across your active paylines. This is a fairly simple machine, and there are only eight symbols to match. The lower five are represented by the poker ranks from tens through aces, but are done so in a unique way: each symbols is made up of a plate on which sushi is being served, with the plate (or plates, in the case of the “10”) being shaped like the appropriate letter. Larger wins can be won by matching plates or the chef’s tools. The biggest win comes from a traditional teapot; two or more of these symbols will earn you a prize, while five in a row are worth 1,000 times the amount you bet on that particularly payline.

Your winning chances in Sushi Bar are bolstered by the addition of two special symbols. First, you’ll sometimes see the most popular of sushi condiments – a bottle of soy sauce – appear on the reels. This symbol acts as the wild for this machine, substituting for any other symbol in order to help make winning paylines. The soy sauce is especially flavorful in this game, as it doubles the size of any wins it takes part in!

Next up are the fan symbols. These symbols are designed to act as a scatter, and can score wins no matter where they appear on the screen. Hitting two or more of these symbols anywhere will earn a prize, starting at 50 credits for hitting just two of them. Hitting three or more will activate a free spins game, with players earning eight free spins for three fans, up to a maximum of 20 free spins for five fans. Once again, all wins are doubled during this free spins game.

And that’s it for Sushi Bar: there are no other special features or bonus round accessible through this machine, making it a very straightforward game, especially by Betsoft’s standards. Instead, the game is all about solid slots action and the stunning graphics you’ve come to expect from all Betsoft machines. It’s a game that manages to be entertaining without resorting to gimmicks or overloading itself with confusing bonus rounds – a feature that many players are likely to appreciate.